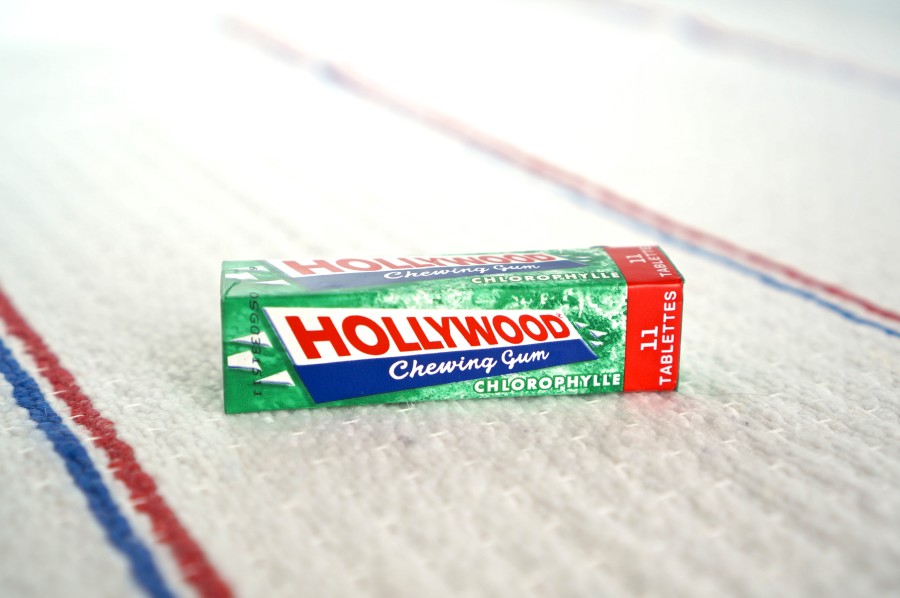 I loved the colorful design of the package of Hollywood Chewing Gum.

You might find yourself doing a double take if you walk past this colorful pack of gum– with the very un-french “Hollywood” emblazoned across the front– in a Parisian market.

France developed a taste for American chewing gum during World War II, with the arrival of American GI’s. As the GI’s liberated French towns and villages, they doled out handfuls of American gum to local French villagers as a souvenir.

One of those GI’s who served in Normandy during WWII later returned to France and started his own chewing gum company, naming it Hollywood Chewing Gum, after that glamorous American lifestyle. Hollywood gum has been the best-selling gum in France ever since (and surprisingly France is second only to the US in its consumption of chewing gum).

While Hollywood Chewing Gum is available in different flavors, like strawberry (fraise), I selected the spearmint, mostly because the French word for spearmint, chlorophylle, reminds me of science class.

When I opened my package of Hollywood chewing gum, I was expecting to see little squares pieces, as the package indicated 11 “tablettes.” But nope, these “tablettes” are just regular sticks of gum. The flavor is crisp and minty, not wholly different from American gum. But the striking design and story behind the brand makes Hollywood gum a fun souvenir to bring home from France.

Have you tried Hollywood Gum from France?

What to Buy: Hollywood Chewing Gum, Chlorphylle flavor is our favorite
Where to Get it: all over France, in supermarkets and bodegas. We bought ours in Paris.
What to Know: though I loved the story behind the brand, the company is no longer owned by that GI who served in Normandy– it has since been bought up by Cadbury.

I'm a New Yorker who loves to escape the city to travel and shop-- whether visiting a local artisan or learning about a destination's offbeat trends.
View all posts by Kristin Francis →
An English Picnic Straight out of a Jane Austen Novel
My Favorite NYC Bagels (and Why You Shouldn’t Fall for the Birthday Cake Bagel)