Sometimes, a souvenir is so ubiquitous that you lose any sense of urgency to buy it. You know you’ll see the souvenir again (maybe even many times over), so you waiting seems like a logical decision. You might be thinking–

At least these were some of my rationalizations when I put off buying my one, must-have Japanese souvenir. 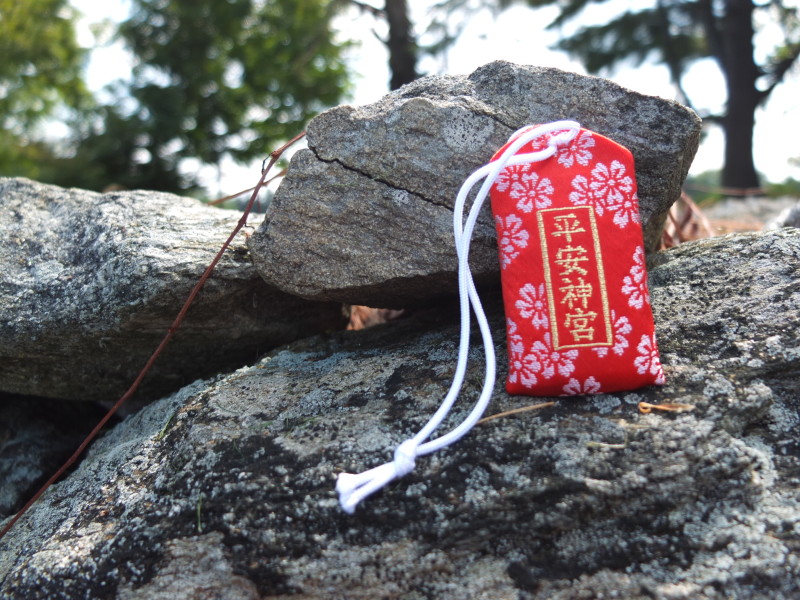 My top must-have souvenir for Japan wasn’t a kimono, a fan or chunky wooden sandals– it was a good luck amulet known as an omamori. In Japan, omamori are beautiful little objects on their own– colorful, silk brocade pouches that are often handmade.

But the best part of omamori are the good luck they hold, via a short prayer or inscription tucked inside. While I am not particularly superstitious, I do have a bit of an obsession with good luck charms, just in case. And Japanese omamori are the holy grail of lucky charms.

Afterall, omamori don’t just deliver general good luck like a rabbit’s foot. Nope, omamori deliver specific good luck– which must be more effective. Need to pass an exam? There’s an amulet for that. Need to find a spouse? Yep, an amulet for that too. Need protection from bears? No worries, the amulet has you covered.

Omamori are available at most temples and shrines across Japan. But while you don’t need to follow any particular religion to buy one, it’s important to respect the cultural significance behind them.

Japanese Temples and Shrines where I didn’t buy an Omamori

As I mentioned above, I did not buy my omamori at the first Japanese shrine I visited. Or even the second or third one. Looking back, my reasons seem ridiculous. 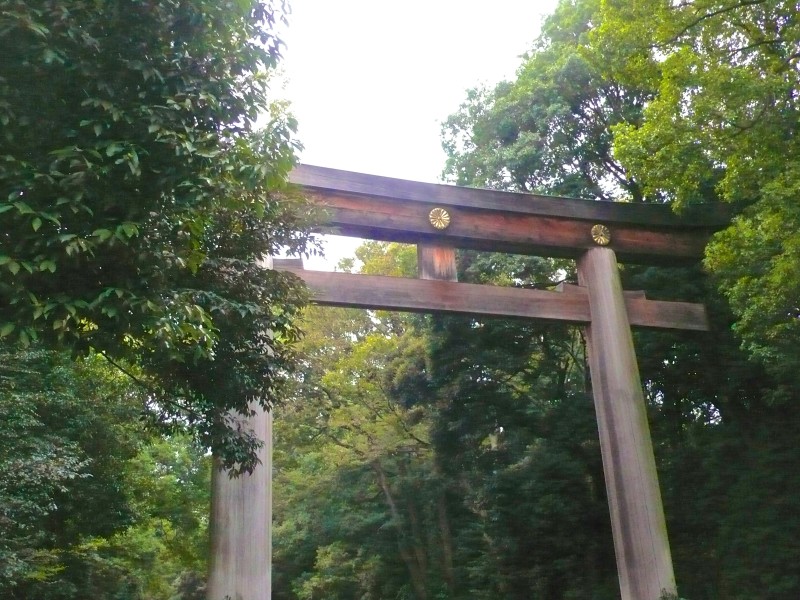 We visited Meiji Shrine on our first day in Japan. Everyone knows you don’t buy the first thing you see. 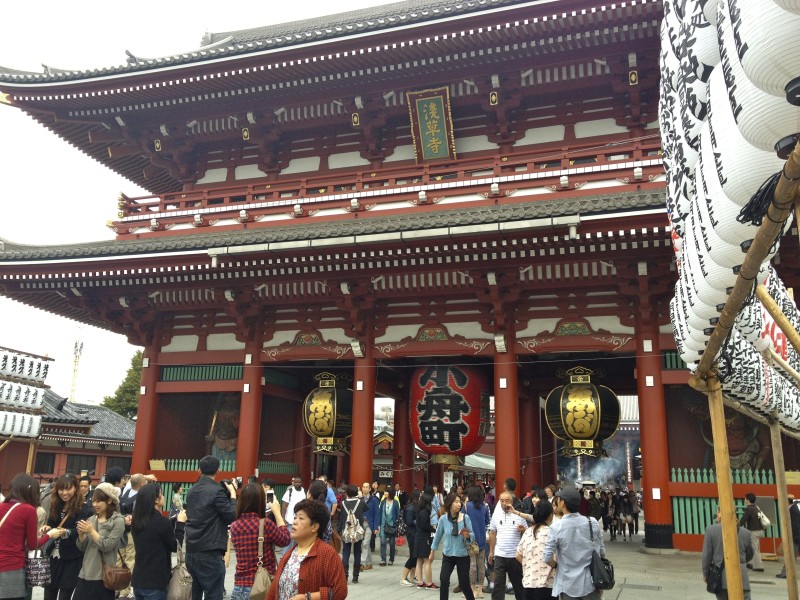 Asakusa was only the second stop on our tour of Japanese temples and shrines. I did peruse the omamori here, but they seemed pricey at about $15 per amulet (not that I had any idea what the going rate was). I decided that there must be a mark up on the omamori in Tokyo and they would be cheaper in other cities. 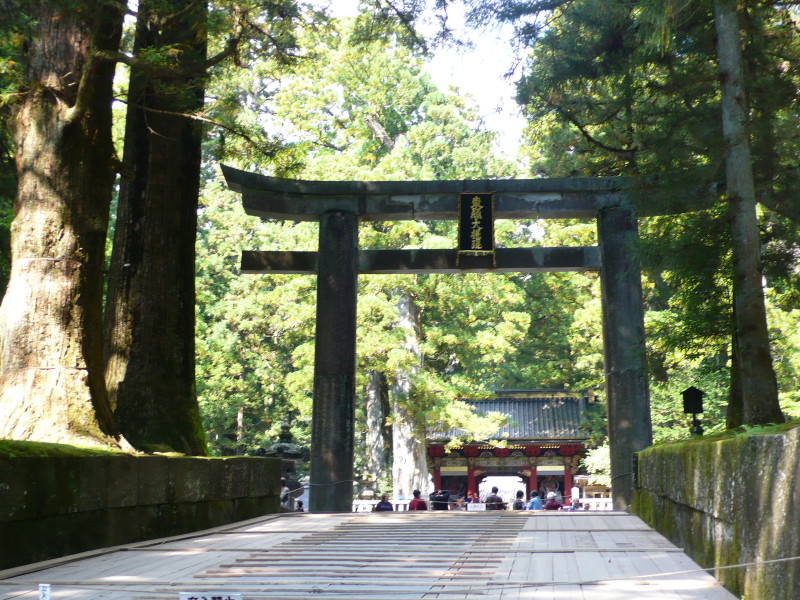 This gorgeous mountainside sanctuary dating back to the Edo period is worth a visit. But if you squeeze Nikko into a day trip from Tokyo like we did, you may find yourself rushing around to see all the sites. And of course doing other critical things like posing for selfies with the three original wise monkeys (of the see/hear/speak no evil fame). We barely made our train back.

Fushimi Inari is known for its red tori gates that snake up the mountain to the summit. Pairs of stone foxes mark the trails. In broad daylight, with sunshine flooding through the gates and the camaraderie of other travelers, I am sure this must be a lovely experience.

But we didn’t arrive at the Fushimi Imnari Shrine until very late afternoon. As dusk was quickly approached, we quickened our pace as we hiked up the now-deserted tori gate trails. The stone foxes only added to the ominous feeling– I swear we heard some rustling in the underbrush. We decided that maybe this would not be the best time to dawdle and skipped the omamori shopping. 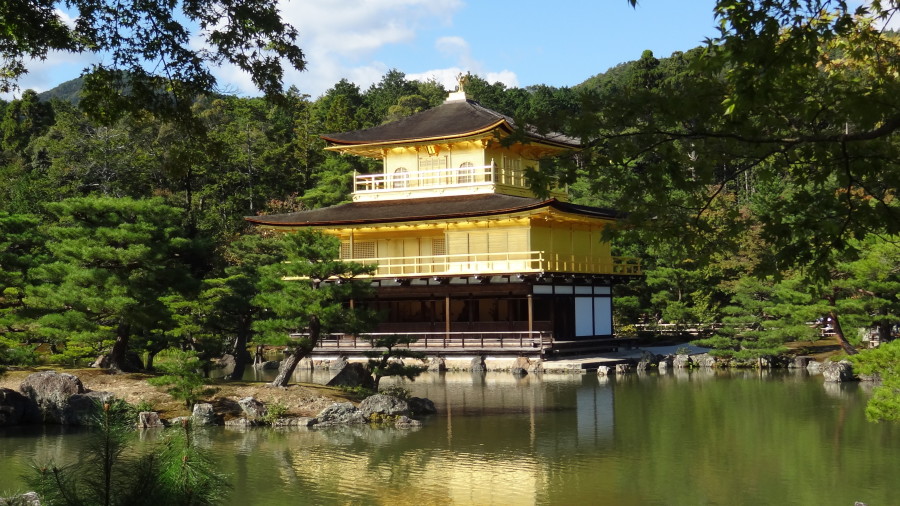 There is no question that Kyoto’s Golden Pavillion is the quintessential photo opportunity. But while the original temple dates back to the 14th century, the structure you see today was rebuilt in 1955. That seemed way too new to confer the best good luck so it was easy to write this one off. 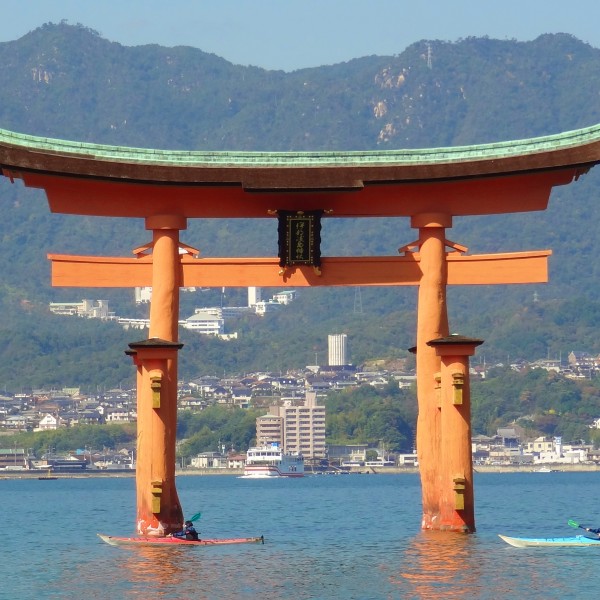 I had been waiting for the right moment to buy an Ema (small wooden plaque) and leave my wishes at the shrine. When I saw Miyajima, I knew it was the place. But leaving wishes and taking good luck away with omamori seemed a little like leaving all your eggs in one basket. I decide to hedge my bets and find my good luck at a different shrine.

Too Focused on My Lost in Translation Moment (Nazen-ji, Kyoto) 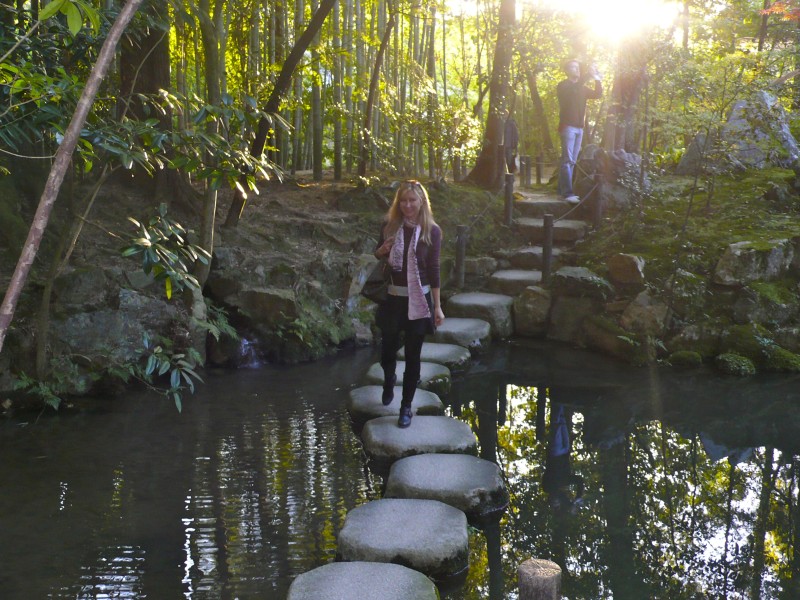 Omamori weren’t even on my mind when visiting Kyoto’s Nanzen-ji temple. For some reason I got it into my head that Nazen-ji was the setting for a memorable scene in the film Lost in Translation (it wasn’t). Ever since I’d seen Scarlett Johansson cross a lily-covered pond on stepping-stones I was determined to recreate the scene.

After spending an hour searching the vast grounds of Nanzen-ji for stepping-stones, by sheer coincidence I did manage to find some. I felt very satisfied as I left with this photo– only to realize back home that the much better, Lost in Translation stepping-stones were on the grounds of an entirely different temple.

The Final Quest for my Japanese Omamori 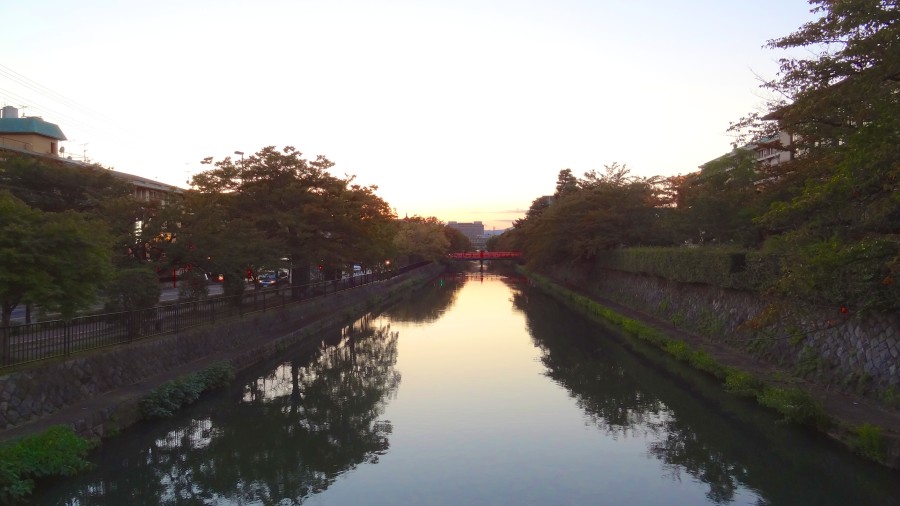 The Heian temple was located down this street and over the bridge.

It was my last day in Japan– we had an early flight booked the next morning. Finished touring our temples and shrines, we plotted where to get a beer in Kyoto as evening approached. I suddenly had a sickening thought– I still not bought my omamori. It seemed very unlucky to plan to get luck in Japan and come home empty-handed.

I looked at the time– in ten minutes, all the temples and shrines in Kyoto would be closed. I made my  travel buddy Linda check the map for the nearest temple and the fastest route. According to the cartoonish tourist map, we were right next to Heian shrine. 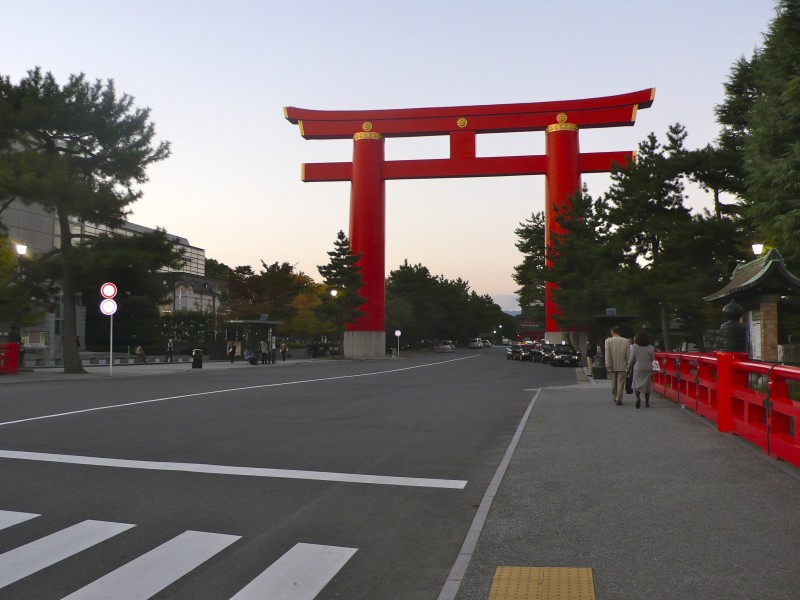 What followed was a mad dash over to the bridge to Heian’s gate (we quickly learned that those colorful tourist maps aren’t drawn to scale). When we arrived, the gate was closed. Officially anyway. While Linda waited outside, pretending she wasn’t with me and wishing she had a cold beer, I maneuvered around the closed gate and walked into the shrine. 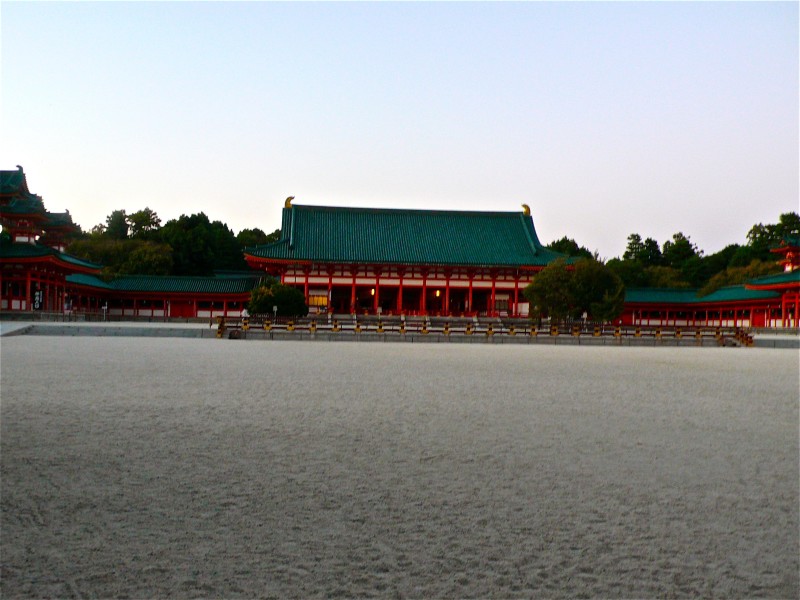 Proof that Heian was actually closed– have you ever seen a popular Japanese temple this empty? 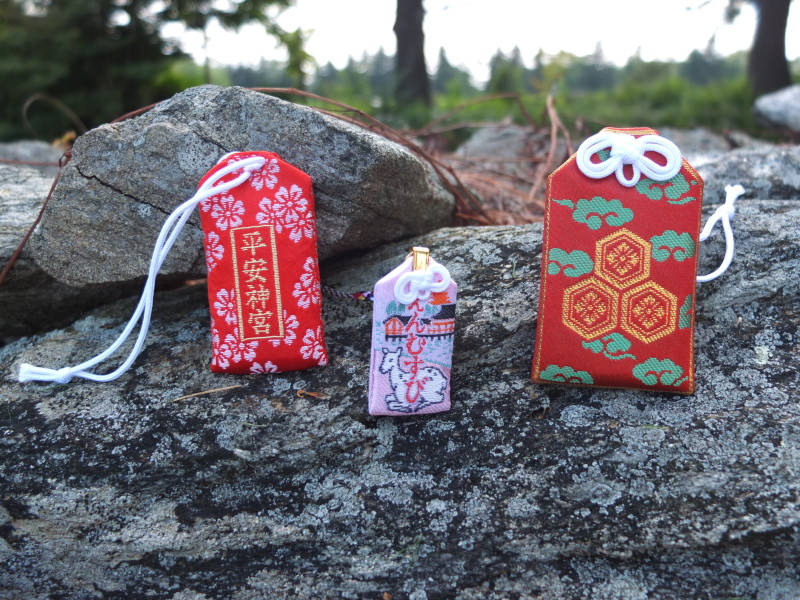 Only because the Japanese are exceedingly polite, I managed to walk away a few minutes later with a few prized omamori, that have been bringing me good luck ever since.

Have you bought omamori in Japan? Tell us about it the comments below!

I'm a New Yorker who loves to escape the city to travel and shop-- whether visiting a local artisan or learning about a destination's offbeat trends.
View all posts by Kristin Francis →
DIY Crafts from Travel Souvenirs: Make a Shadow Box
London to the Continent: Why this New Yorker Loves Eurostar

14 Responses to How I Almost Left my Good Luck in Japan: Omamori