Take an egg, hallow it out, let it dry.

Paint it, fill it with confetti, then seal the opening with a small piece of tissue.

Cascarones, also called confetti eggs, are a popular Easter tradition in Mexico. I thought it sounded like a sweet tradition and imagined cherub-faced Mexican children playful tapping their school friends over the head with the cascarones, releasing a stream of colorful confetti.

Until my Mexican friend Raphael corrected me– “no they hurt.”

Paper thin, delicate egg shells hurt? I laughed and  asked Raphael if he had an extra-soft head. Raphael explained how Mexican school children really use cascarones on the playground–

[quote]We Mexicans use all our strength to break them on people’s heads. We use them to hurt people… in a playful manner of course. In our minds, European and American customs about searching for chocolate eggs is really bizarre. I don’t know why they would choose to do that instead of fighting to the death like we Mexicans do. We also don’t worship St. Easter Bunny.[/quote]

Raphael went on to explain how the inexpensive prices of the cascarones (a few pesos per bag) made them a playground staple, much to the annoyance of the school janitor, tasked with cleaning up all the scattered bits of confetti and egg shells.

Headaches aside, do these cascarones make a good souvenir from Mexico? They’re easy enough to find, especially around Easter (vendors sell them in plazas all over Mexico). They’re incredibly affordable so you can buy them in bulk to hand out around the neighborhood.

But are you allowed to bring them back over the U.S. border, or will these suffer the same fate as the illegal Kinder Surprise Egg? If you’re not American, you’ll have to check the rules for your own country, but in the U.S., you need to comply with certain restrictions to bring back Mexican cascarones.

Cascarones (also called confetti eggs) originating in Mexico are explicitly banned by US Customs–– BUT they do carve out an exception. You are allowed to bring cascarone eggs back in a disassembled state–that is, remove the confetti from the egg and carry each component separately. The painted and decorated egg shells themselves must be “clean and dry,” and “presented to CBP for inspection with fillings.” Only 10 shells are allowed per passenger (otherwise they might be considered a commercial import).

If that seems like a lot of trouble to bring back authentic Mexican Cascarones, you can also try a DIY method and make them yourself at home.

Have you ever bought Mexican Cascarones or made your own Mexican Confetti eggs? Do you have other Easter egg traditions? Share in the comments below!

Thanks to my Mexican correspondant Raphael Zoren for his tongue-in-cheek explanation of cascarones. If you’re curious about the culture of Mexico from an insider’s perspective, check out Raphael’s enlightening (and often hilarious) travel blog, Journey of Wonders.

All photos in this post are made available for reuse courtesy of Creative Commons licenses (attribution provided via Flickr embed).

Want to read more about illegal eggs? Check out my post about Kinder Eggs– if you bring this little chocolate egg home with you, you could be fined $2500 per egg! 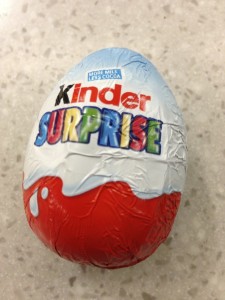 I bought these last year and again this yearat a Walgreen's in Boise, Idaho. My son loved them!

Thanks for sharing! I haven't seen anything like them in NYC.

I've seen a version of these (died eggs filled with confetti) at a Walgreens in Michigan..

I buy them all the time at the regular grocery stores in North Texas. They are a tradition at my daycare at Easter time.

you can buy them here in utah. at a local store they are so much fun & my kids love throwing them

Hi Debbie thanks for commenting! Interesting to hear this tradition has crossed the border!

You can buy cascarones in grocery stores all over South Texas (and I'm sure in other shops and places in the Southern US, as well).

The dangers of confetti eggs and Kinder surprise. :)

I love stuff with hidden surprises inside (Kings cake too!). The confetti eggs were banned not because of the confetti but some disease back in 2003 that sounds like it's been eradicated at this point.