The British, with their love of sweets, are well-known for making delicious candy that is craved worldwide (there is a reason most large American supermarkets have a dedicated British sweets section). I thought I knew British sweets pretty well– after all, on each visit to the UK I  make sure to raid a local British supermarket to stock up on Cadbury bars and other sweet treats.

But on a recent visit to England, I came across a retro sweets shop, filled with British sweets from days long past. Barratts shrimps? Rhubarb custards? I was introduced to a whole new world of sweets, most with intriguing names that begged sampling. Fortunately, British retro sweets are mostly sold in bulk by weight, so taste-testing is as easy as loading up your bag with one of each candy. Not every piece of retro candy was suited to my modern palate, but it was still fun to try them all.

A bit of essential vocabulary– what we Americans refer to as “hard candy” is called “boiled sweets” in the United Kingdom. 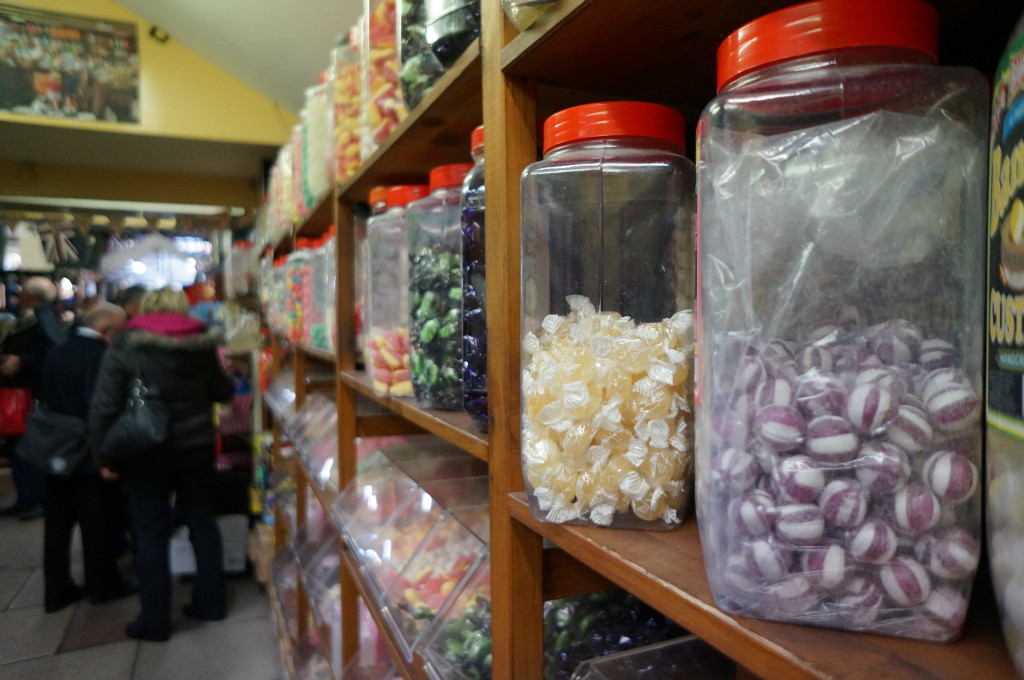 Retro British sweets also make a great gift for a candy fanatic. Or do what I did– I filled up a huge bag (er, about 30£ worth) and brought it as a fun housewarming gift to a London house party– a little more memorable than the standard bottle of bubbly.

Decor at a British sweets shop.

Flags at a British sweets shop.

Here are some of the more interesting retro British candies I saw on a recent trip to London: 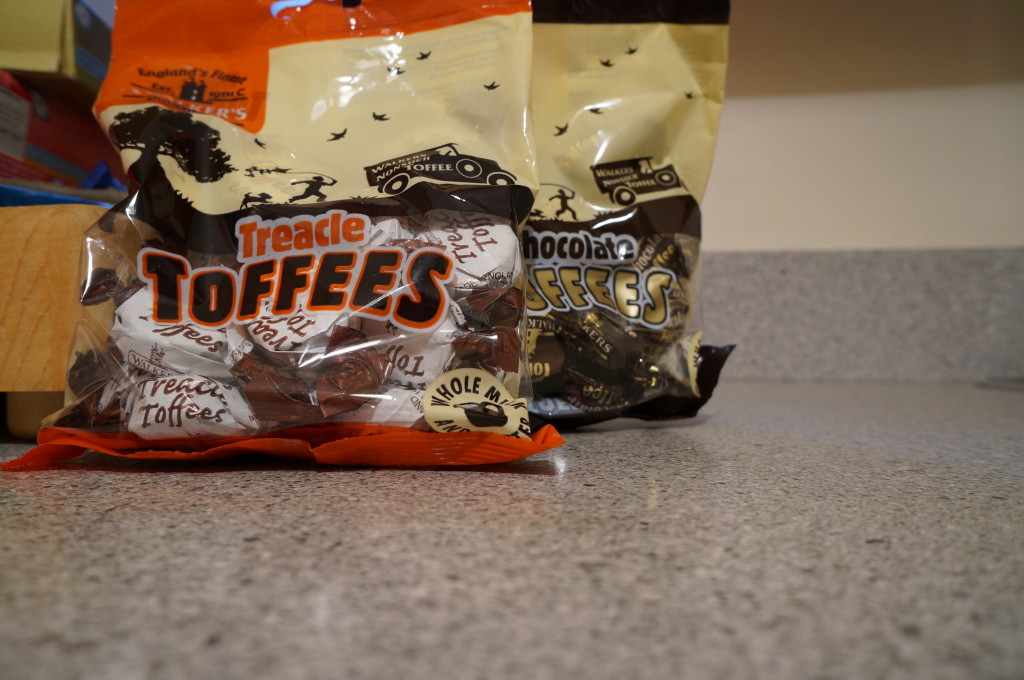 I loved these English treacle toffees.

English toffee is a classic sweet treat and has remained popular to this day, so the standard English toffee is not very hard to find, even in America. Somewhat less available are specialty flavored English toffees like chocolate and treacle– I picked these yummy treats up on a recent visit and they didn’t last very long back home. 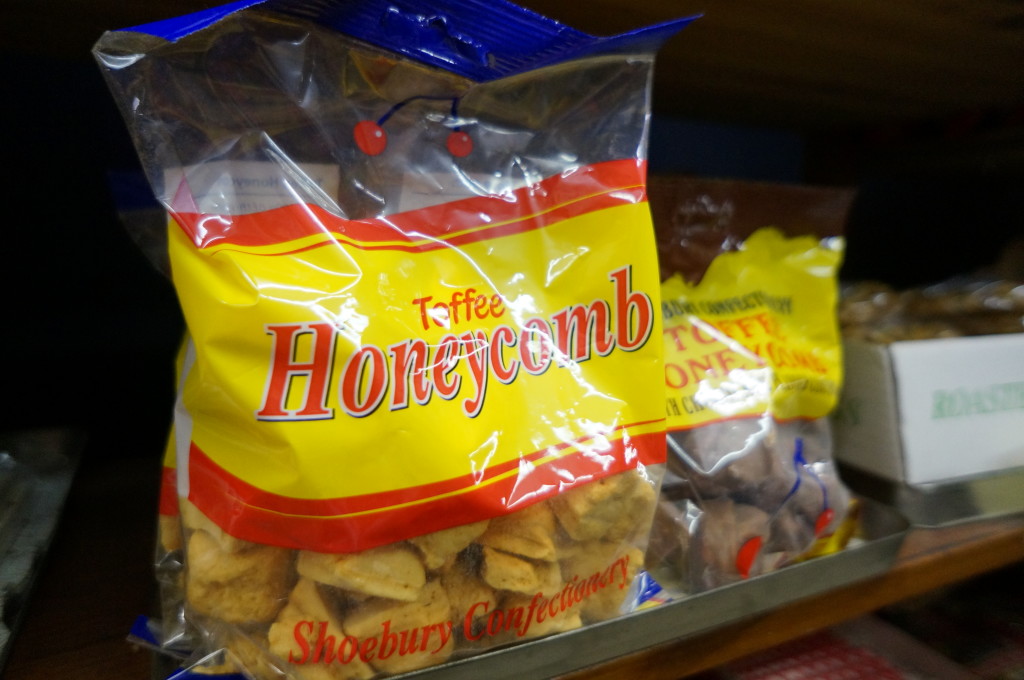 Cinder toffee is a sugary treat that is all about the addictive, sponge-like texture.

Rock candy (named from the place of origin, like Blackpool rock or Brighton rock) is similar to a candy cane, except in fat, stick form. They are made by hand and often have a pattern in the center. 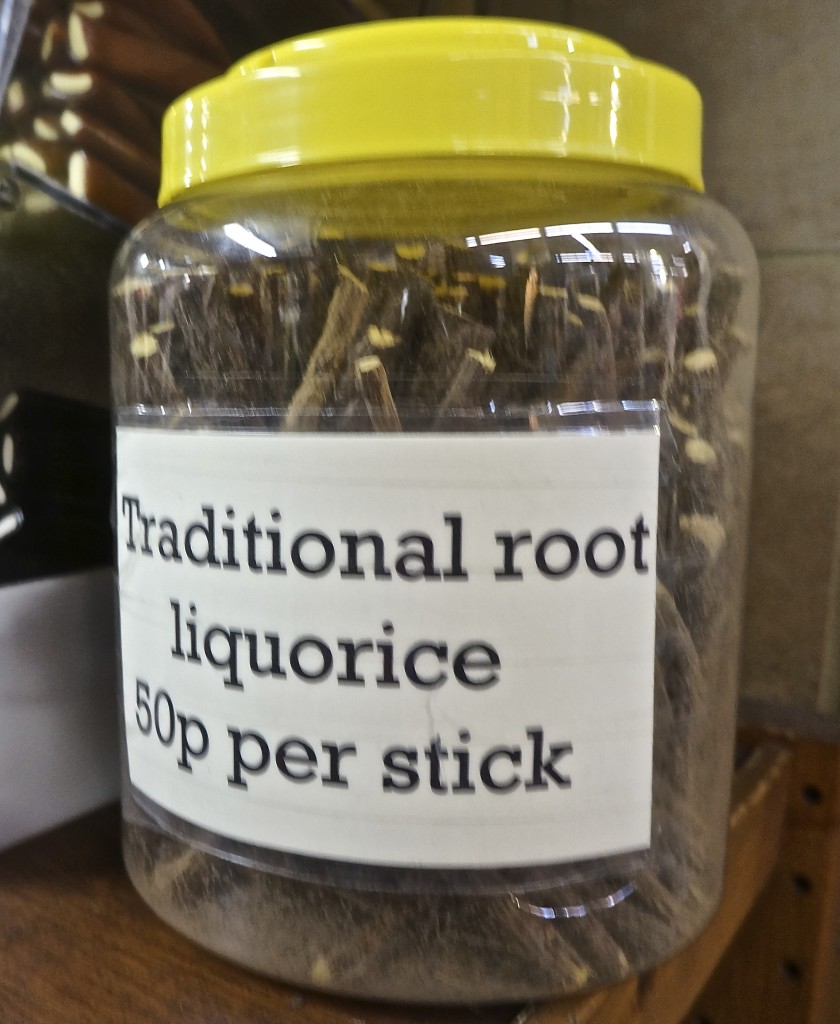 This real licorice root stick is chewed on and also serves as a digestive aid. 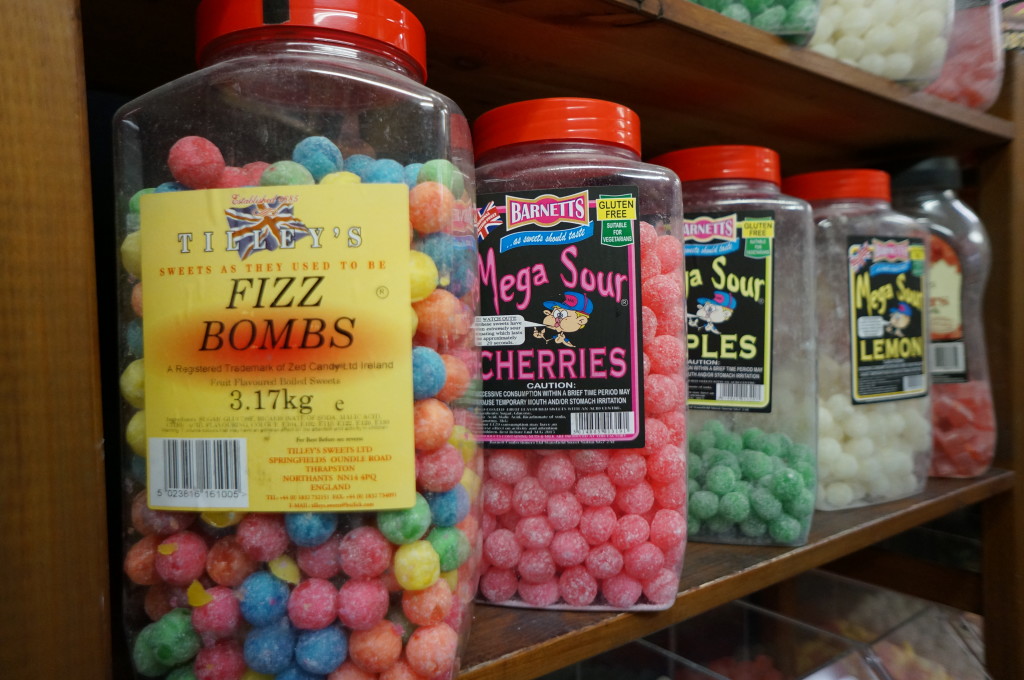 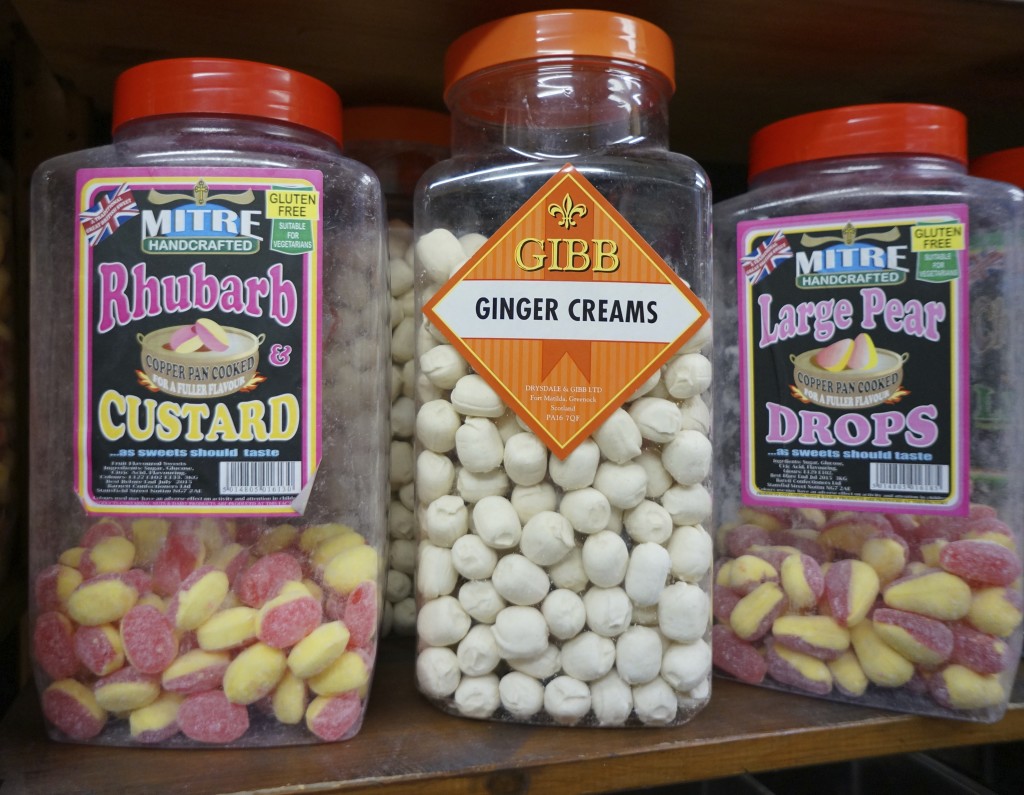 Bins and bins of boiled sweets line the walls of British sweets shops. 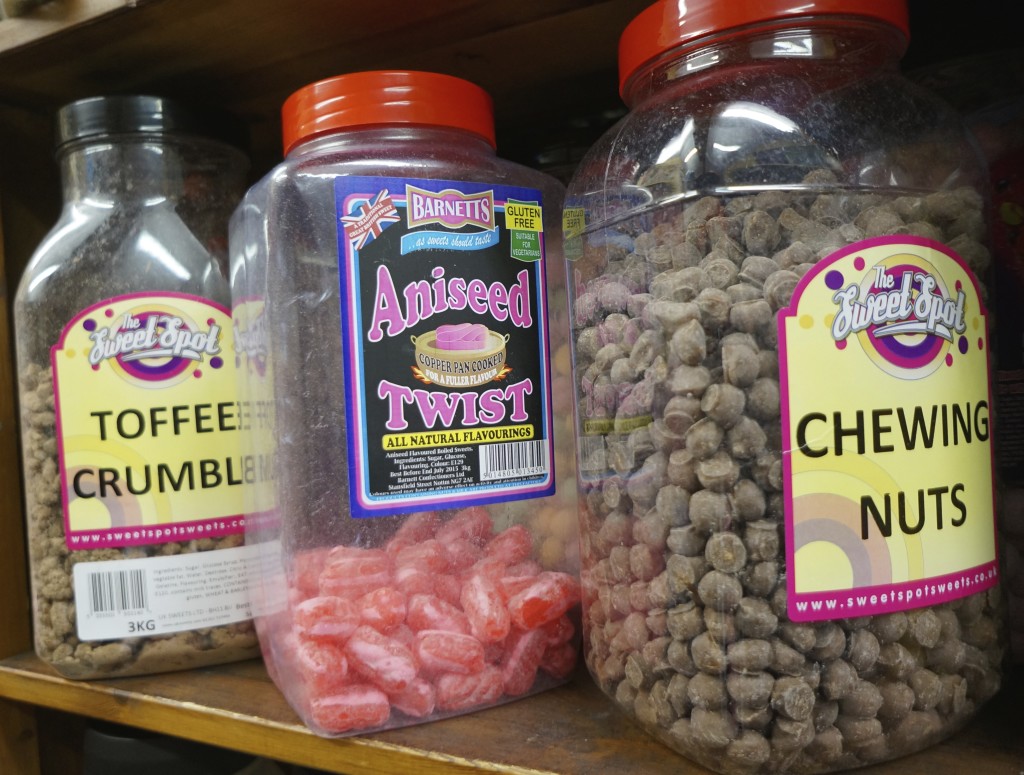 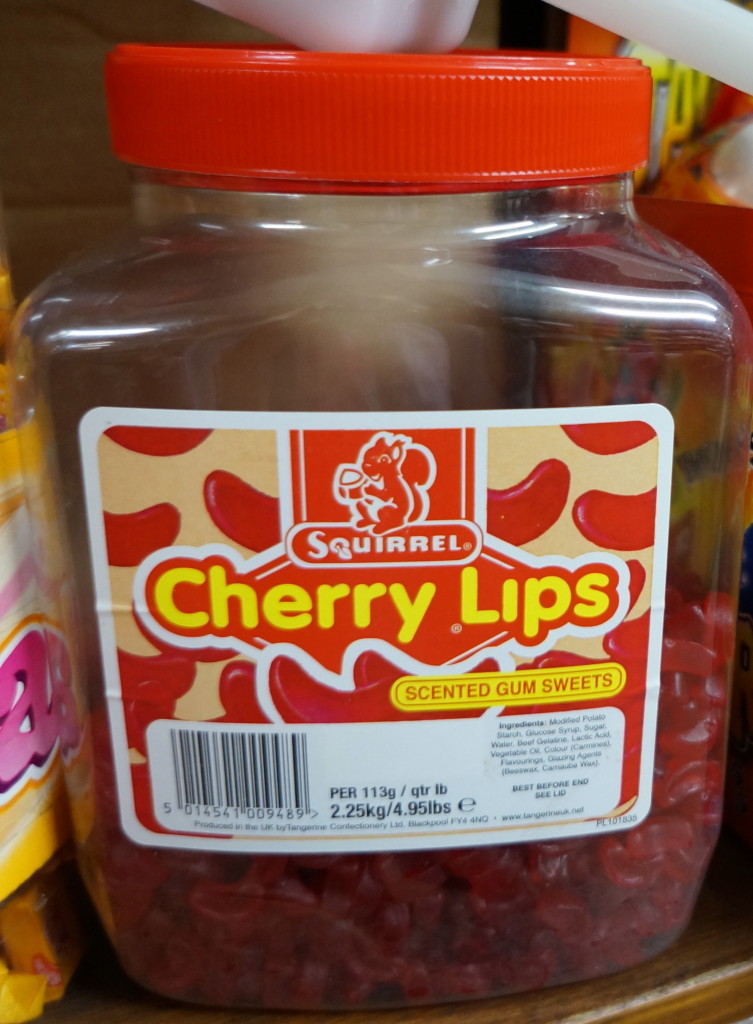 This British sweet has its loyal fans.

Cherry lips are one of those divisive candies– you either love them or hate them. The “scented” description should tip you off— these are more perfume-y than cherry. 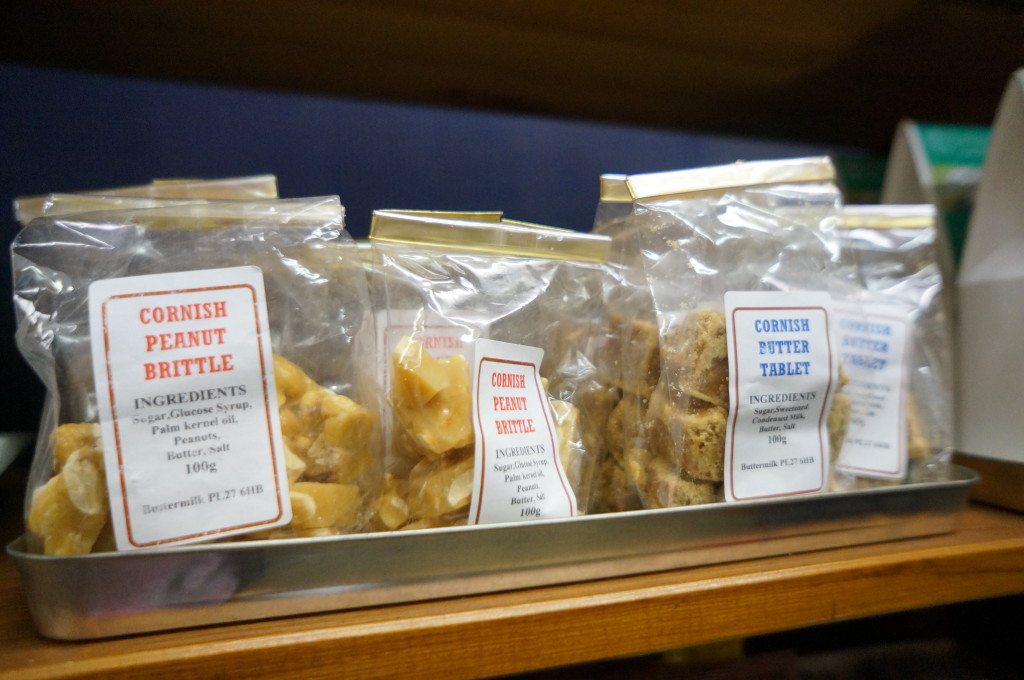 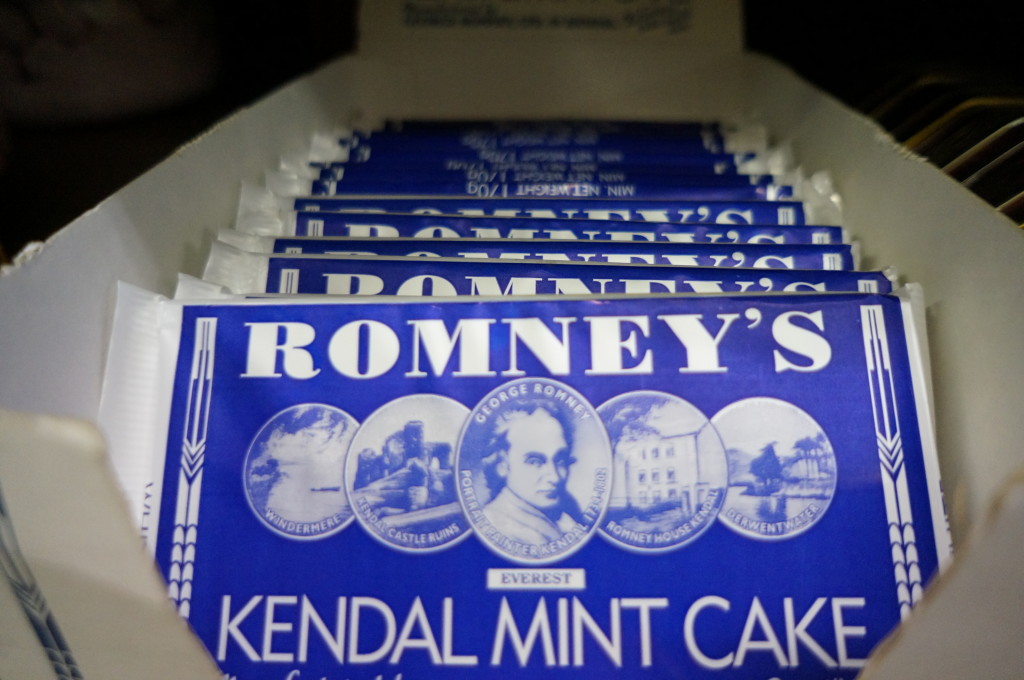 Kendal Mint Cake originated (and is still made)  in England’s Lake District. Mint Cake can be  tricky to find in London (it used to be sold at Fortnums, which is how I discovered it, but they no longer stock it), but they are delicious and worth seeking out.  Kendal mint cake is basically a bar of peppermint flavored glucose (that’s sugar), and tastes like a better version of a peppermint patty, minus the chocolate (though chocolate covered versions are also available). The high sugar ration makes Kendall mint cakes an excellent energy booster– they are a hiking favorite and were even brought to Everest by Sir Edmund Hillary.

Where can you find some retro British sweets in London?

Note: I took all my photos at Toffee Nose, tucked into the marketplace in Convent Garden. Can a local let me know if Toffee Nose is still open?

What are your favorite English sweets? Tell us about it in the comments below!

Toffeenose is still open and going strong. My Dad is the owner. It is open Tuesday-Sunday 11am-6pm. They are located in Jubilee Market in Covent Garden. All the best, Matt.

Hi Matt! Thanks for the tip. When I published this post I must have read otherwise-- did it shut down for awhile?

An English friend sent me a bag of rhubarb custard candies a few years ago (I'm in Canada) - I have been dreaming about them ever since!

So fun! I want to try the Fizz Bombs, Rhubarb Custard, and Licorice Sticks.

What is Treacle flavor?

Treacle is the equvalent of your molasses

cherry lips for me - all the way! i need to try the mint cake on my next trip!