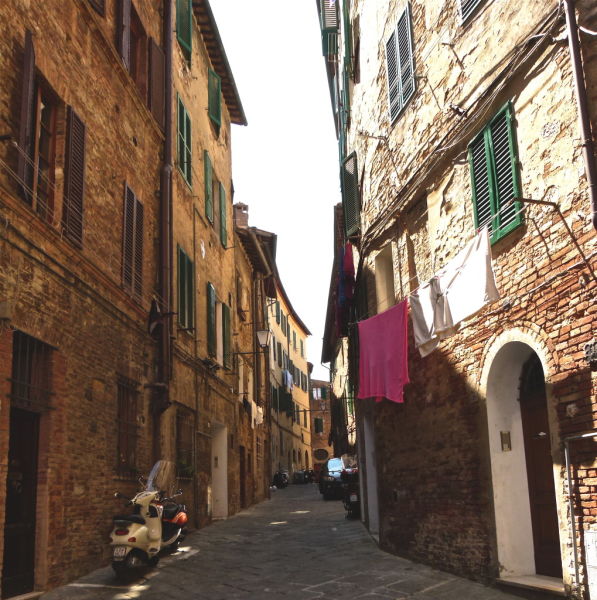 Siena is a city of contrasts

In the back streets of the neighborhoods, it’s just another unassuming Tuscan hill town, complete with colorful shutters, blowing laundry and mopeds sitting at the ready. 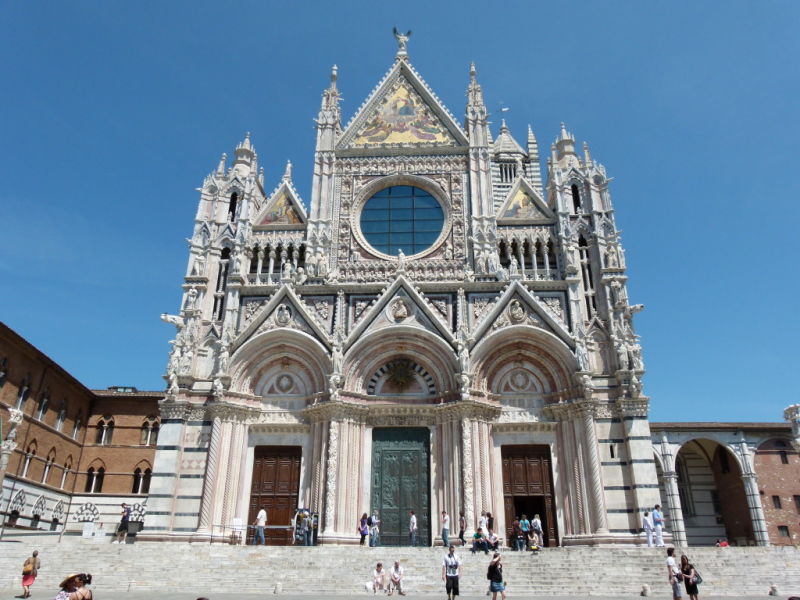 But keep strolling those cobblestone lanes, and inevitably you’ll run right into one of the most unusual, but wholly spectacular cathedrals anywhere– Siena’s Duomo. 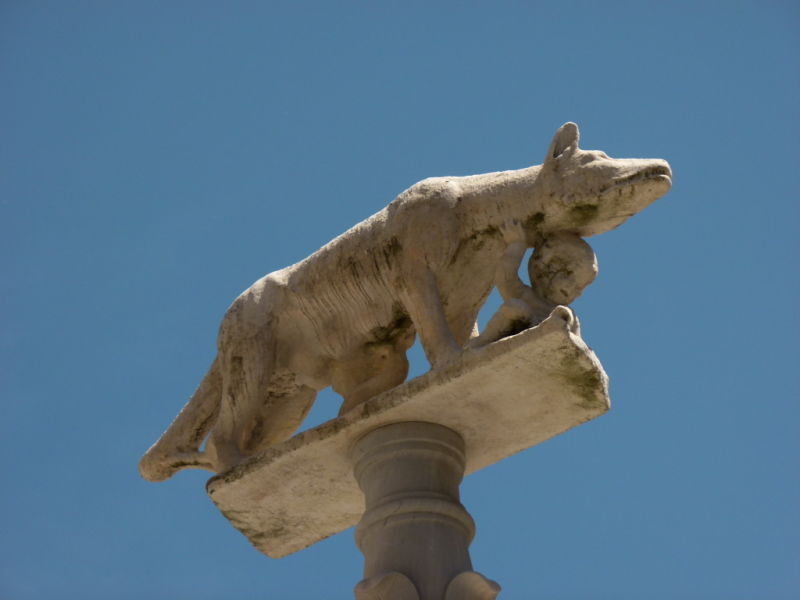 As you walk up the steps of the Duomo, you’ll be greeted by the symbol of Siena, the she-wolf suckling Romulus and Remus.

While this lion gargoyle protects those inside its walls. 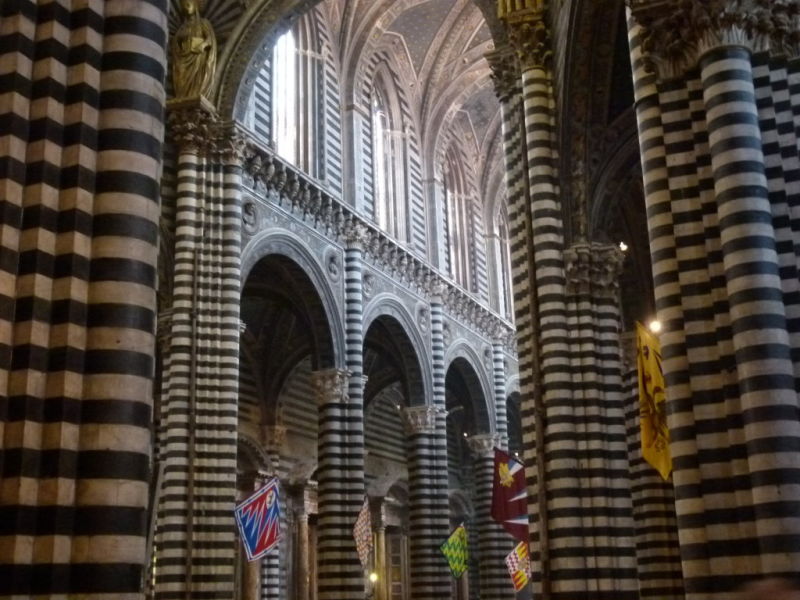 The Duomo’s crazy zebra stripes are not some medieval psychedelic experiment, but  a nod to Siena’s black and white coat of arms.

In the Duomo, try not to be too distracted by the hypnotic stripes to take in some of the amazing art, including the intricate mosaic floor and works by Donatello, Bernini and a young Michelangelo. 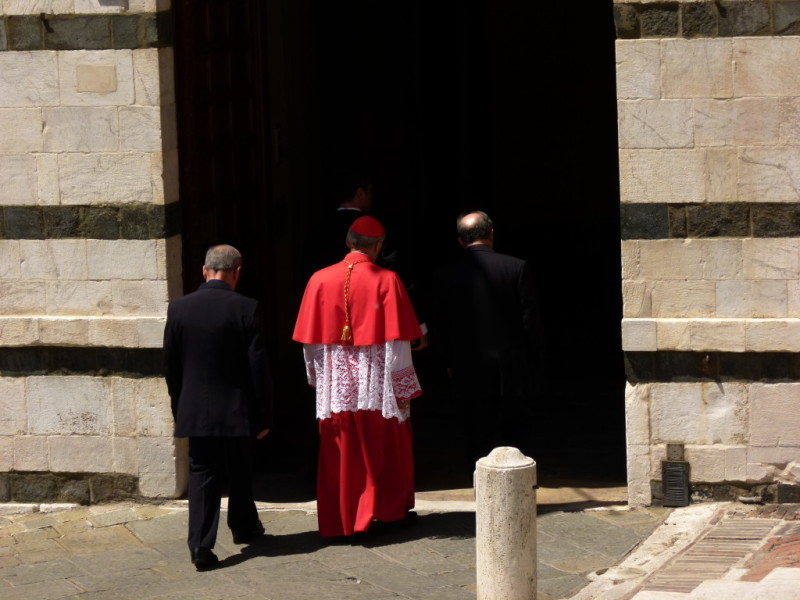 Pay no mind to the cardinal walking by.

On the way out, be sure to keep an eye out for roaming Cardinals. 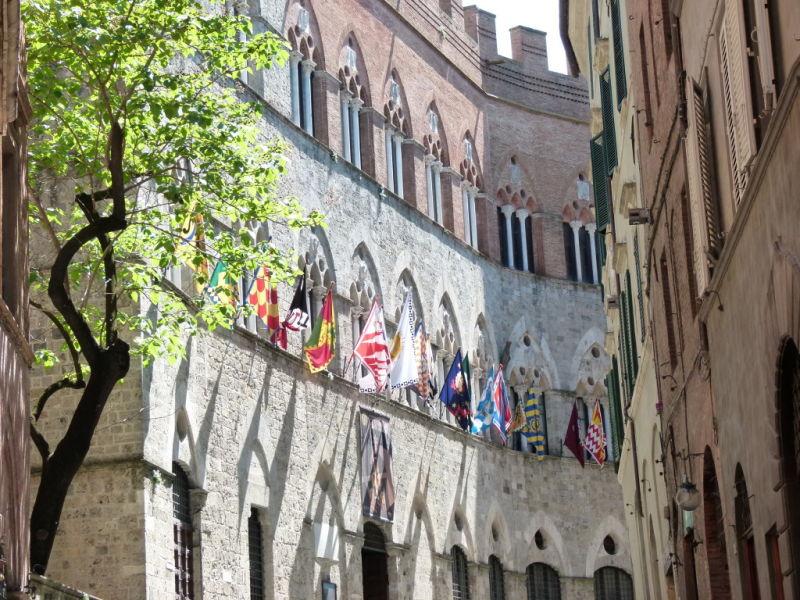 The Real Siena, the Contradas.

Although the Duomo is the most recognized symbol of Siena, the real heart of Siena lies in its 17 separate neighborhoods, called contradas, that date back to medieval times.  Entry into a contrada is restricted to birth or baptism, so forget about becoming an honorary member.  Residents consider themselves citizens of their contrada even before their city, and like an extended family, they look after each other for life.  This fierce loyalty to the contrada creates a sort of contrada subculture, with each district represented by a flag, colors and an emblem, most commonly an animal, real or mythical. 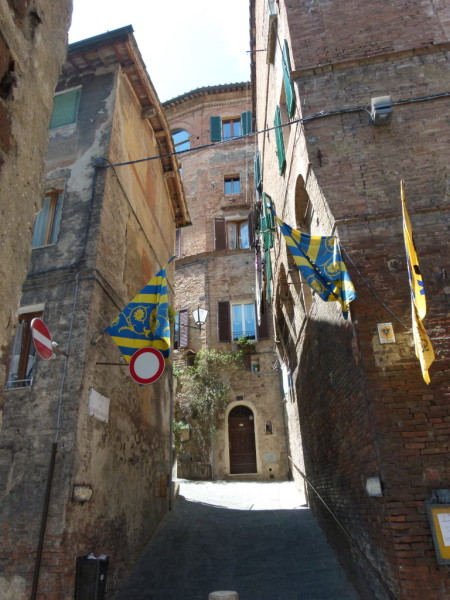 As you wander the city you’ll note the changing of the flags as you move into each new contrada.

The Palio and the lucky barberi

I found one centuries-old palio tradition particularly intriguing.  To determine the starting line up for the race,  wooden balls (barberi), each painted with the colors of the contradas, are placed in a long, beaker-shaped vessel.  The beaker-vessel is shaken and then tipped upside down. The balls roll down the thin neck of the vessel and are locked in place, setting the line up, like an ancient version of a powerball lottery. 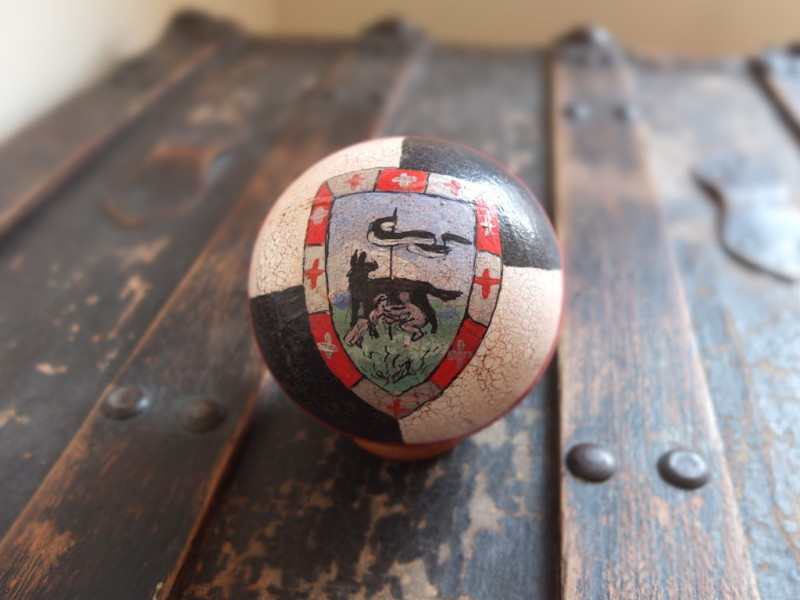 My own ancient powerball

Living in a neighborhood where an occasional chat by the stoop is considered knowing your neighbors, I was drawn to the idea of an entire contrada community becoming your family for life, and wanted to take a little piece of that home with me.   We bought our barberi directly from the artist who entertained us with stories of his own contrada as he worked on other pieces in the shop.

Do you have any favorite Siena souvenirs?  Share in the comments below!

Details:
Hand-painted Barberi, about $30 US
Poke around in the side streets off the Piazza del Campo and you will find many artisan owned shops.  The artists are happy to talk about their work, so ask questions and learn a little more about this great city.