In Norway, trolls are everywhere. 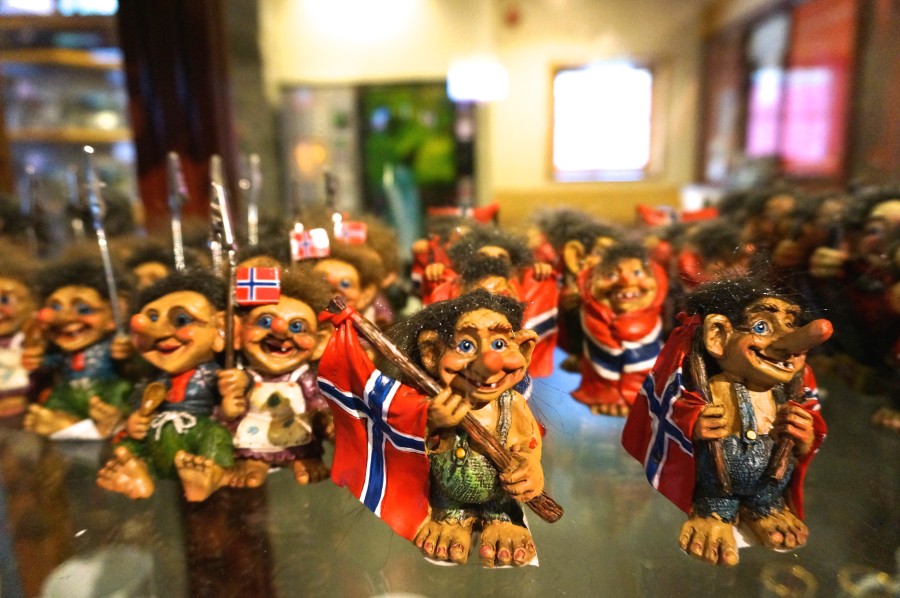 Let me clarify– in Norway’s many souvenir shops, plastic figurines of trolls are everywhere. In fact, these little trolls are so ubiquitous that you might think the entire nation is obsessed with troll figurines, that every Norwegian must have a dedicated shelf to display these little creatures.

But after spending some time in Norway, I doubt the average Norwegian actually spends much time thinking about trolls. While it’s true the legend of trolls originates in Norway and trolls are the subject of many a fairytale (and also a great cult horror flick), these colorful characters are tailor-made for the tourist industry. But does that mean you should pass over trolls and look for more meaningful souvenirs?

Nope, not every souvenir has to be serious– and trolls are just plain fun. I couldn’t wait to buy my souvenir troll and started searching for the perfect troll on my first day in Norway. That said, I did have a couple of troll requirements. First, my troll needed to be handmade, so that excluded 99% of the trolls for sale. Second, he had to be happy– there are lots of creepy looking trolls out there and I am highly susceptible to nightmares. I found the perfect troll in Oslo at Den Norske Husfliden, a shop that specializes in Norwegian handicrafts.

I bought my troll as a gift for someone back home, but it seemed kind of ho-hum just to hand over the little guy with no context. So I thought it would be fun to take the recipient along on the troll’s journey through Norway. (Note: you don’t need to have your own blog to steal this idea– you can do the same thing by taking your own photos and popping them into an album, online or hardcover).

[box]Note on Snapchat: Along with my standard camera photos, I’m also including some of the real-time snaps I shared via Snapchat (if you’re not familiar with Snapchat, it’s a super fun, spur of the moment photo and video sharing app. The lack of Snapchat editing options might mean shaky videos and messy captions, but on the upside you get a window into those irreverent “behind the scenes” moments). Follow me on Snapchat @souvenirfinder to see my latest snaps).[/box]

A Troll’s Journey through Norway– A Photo Essay

1. The train from Oslo to Myrdal 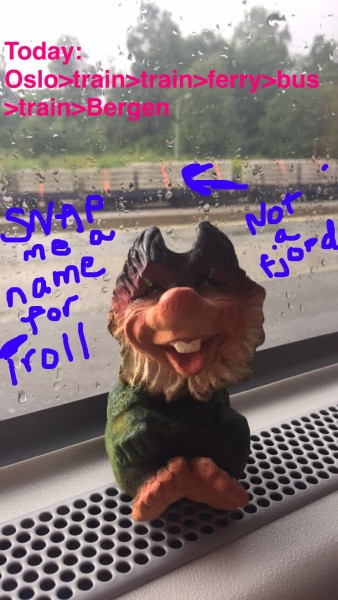 Troll begins his journey with a window seat on the train from Oslo. (via Snapchat @souvenirfinder)

Our troll started his Norwegian journey by train in Oslo. It was going to be a long day of travel, with three trains, a ferry and bus ride to get to our final destination of Bergen. To pass the time, we started off by asking our Snapchat viewers to name the troll. When “Humphrey” turned out to be the best of the viewer suggestions, we changed tact and went with “Troll” instead.

2. All Aboard: Troll Rides the Famous Flam Railway 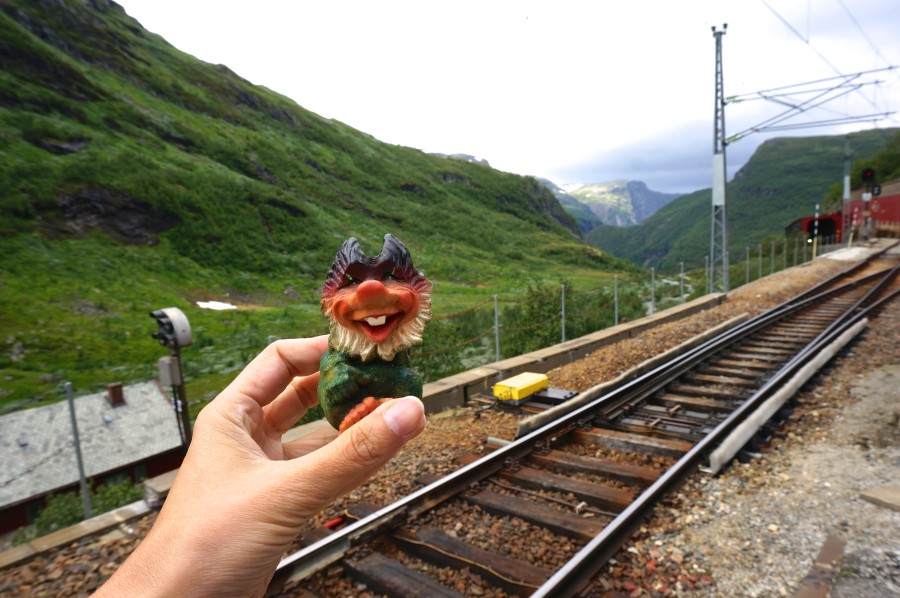 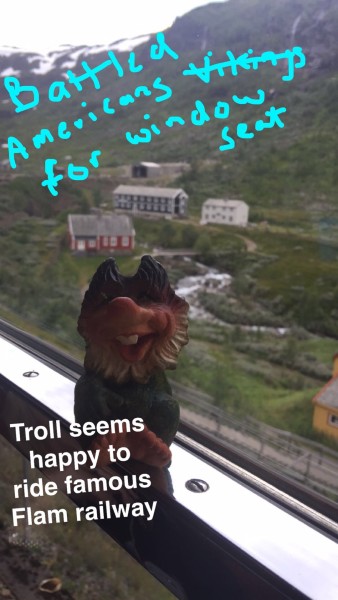 Boarding the Flam railway at Myrdal was a little chaotic as passengers jockeyed for the best window seats. But our nimble Troll easily scored a window and enjoyed some fantastic views. 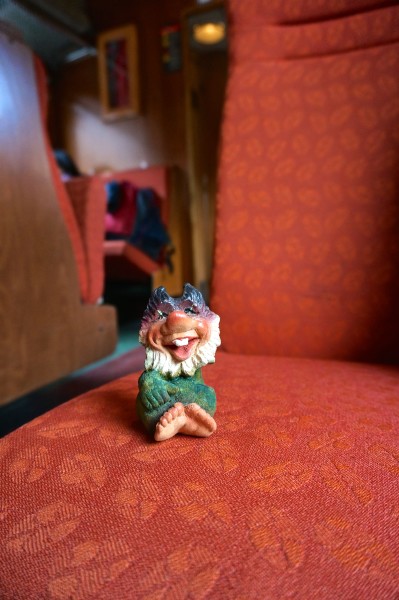 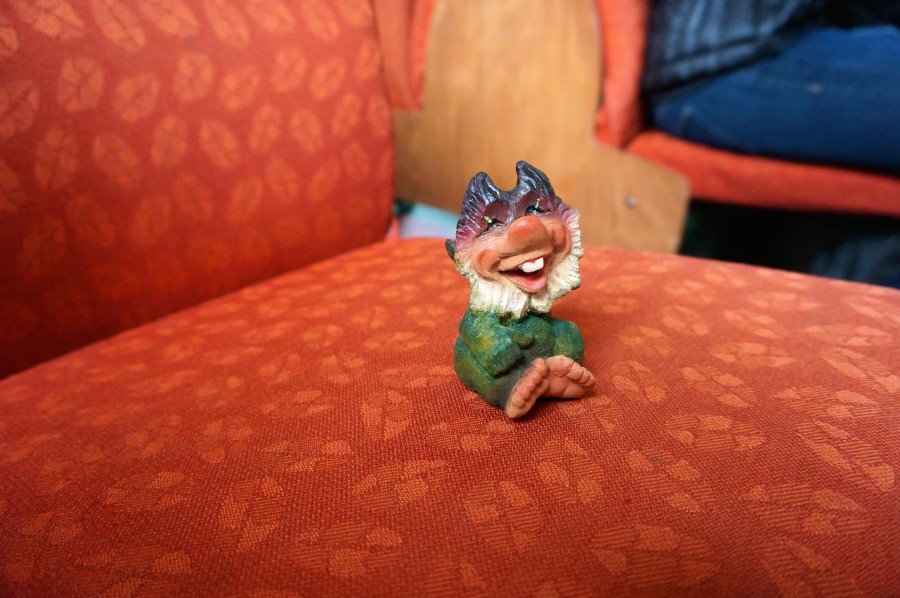 Troll enjoyed relaxing on the cozy vintage seats on the Flam.

3. Troll Takes a Ferry Ride through the Fjords 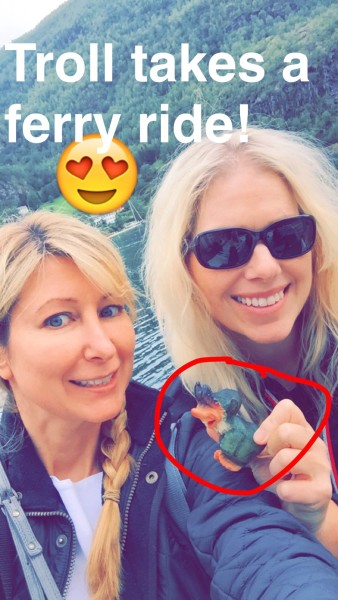 Troll loved feeling the wind in his ears as we rode the ferry through the famous Sognefjord– he insisted we all take a selfie together to remember the moment.

4. Finally after ten hours of travel Troll Arrives in Bergen 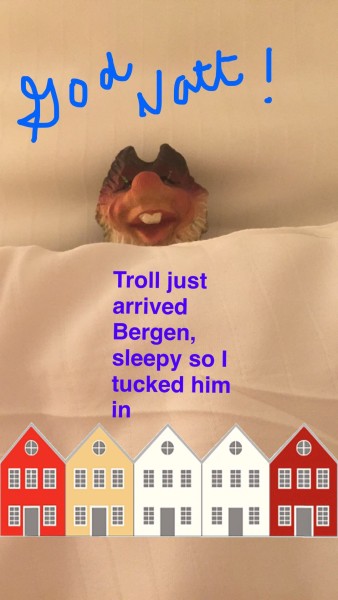 While ten hours of travel sounds long, it was filled with breathtaking scenery. Troll could barely tear his eyes from the views. After another bus and train ride, Troll finally arrived in Bergen. I could tell he was sleepy, so even though he wanted to go out and explore I tucked him in for the night. 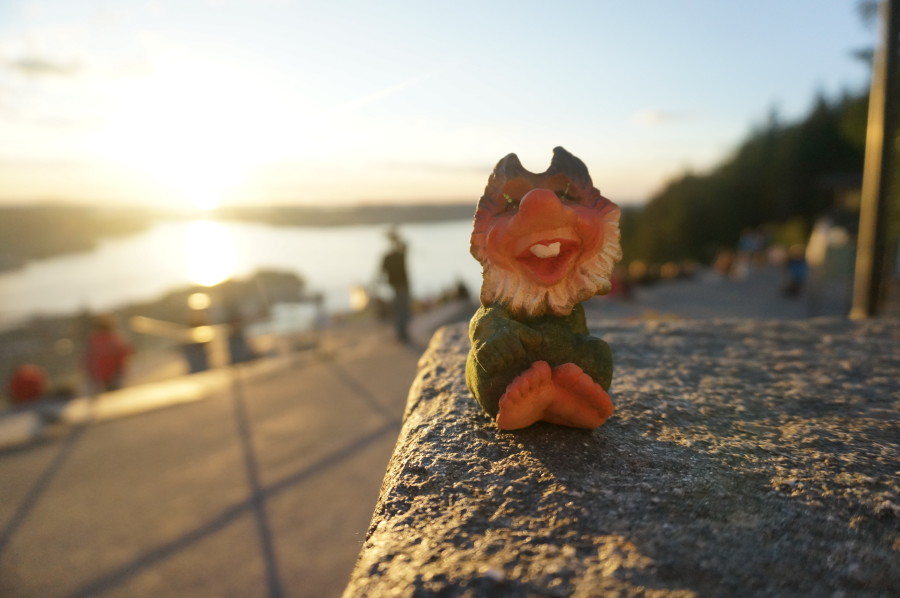 Troll did get to enjoy some time in Bergen. His favorite moment? Sunset. 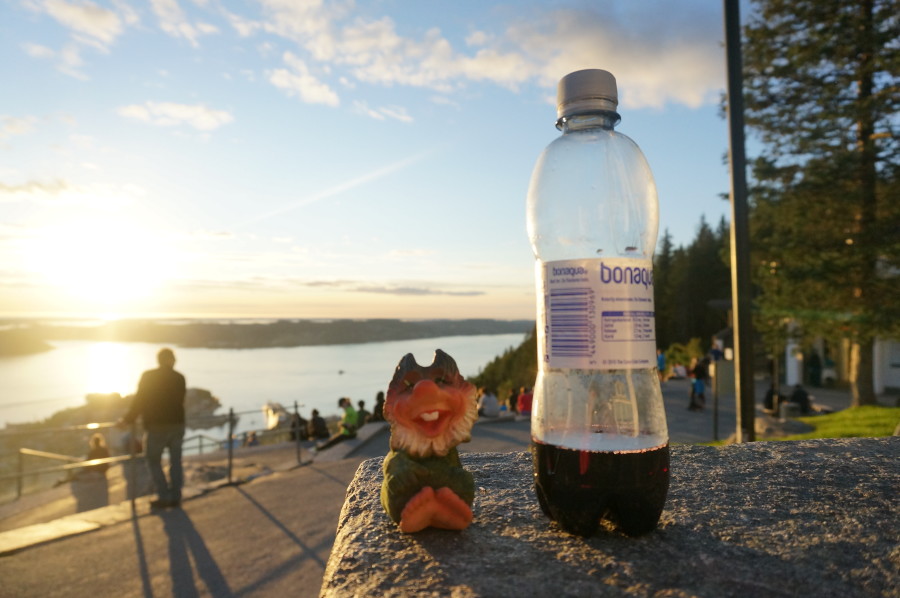 That mischievous Troll smuggled some wine up to enjoy with the sunset. 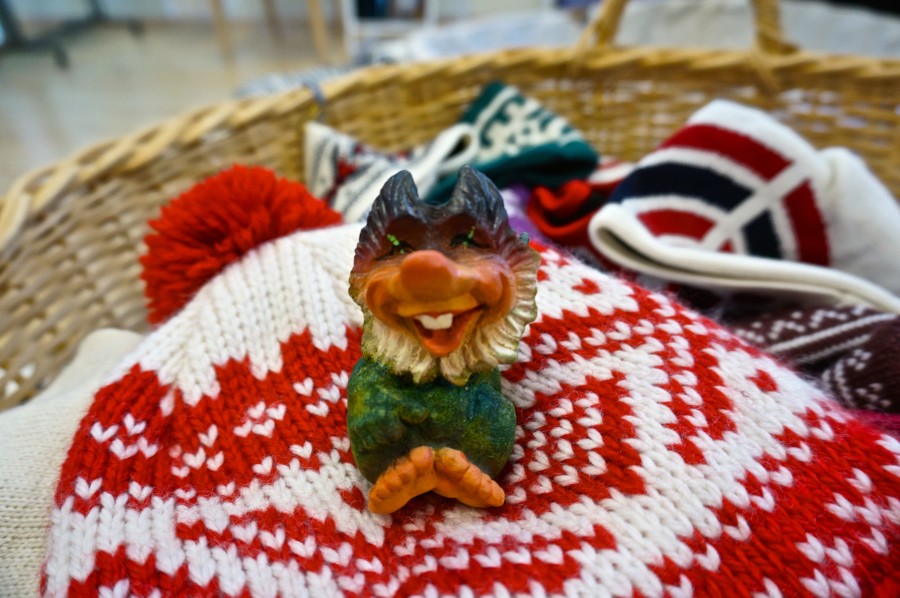 Who knew, apparently Troll loves shopping. Upset there were no tiny Troll size sweaters at Dale of Norway’s factory store, Troll had to make do with a hat, perfect for cuddling up in. 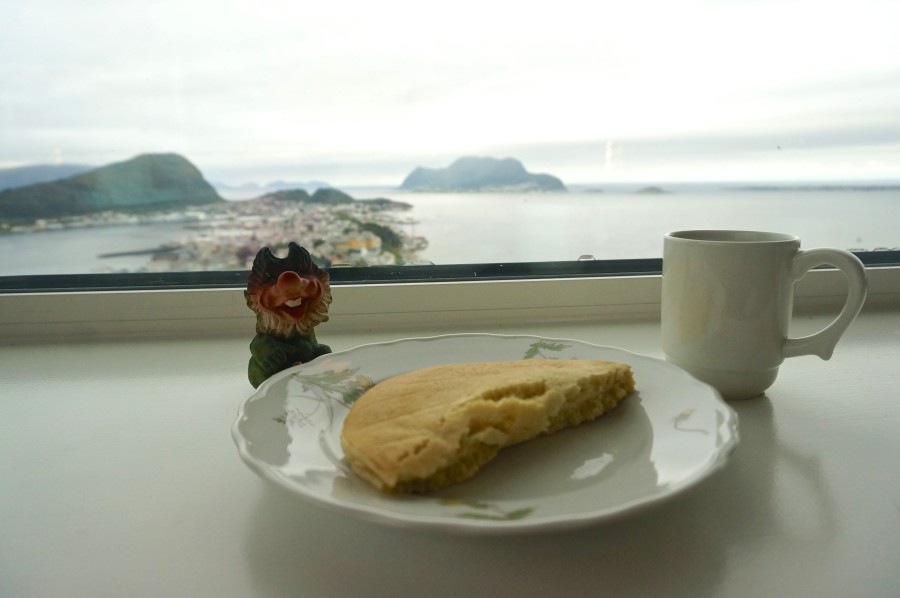 Troll enjoys coffee and Norwegian pancakes, with the stunning backdrop of Alesund.

We learned that Troll has quite a sweet tooth. He managed to put away a pancake at least ten times his size.

Troll turned out to be an excellent co-pilot, finding good radio stations and making sure we stayed on route.

Troll couldn’t be more excited to see the Geirangerfjord for the first time. 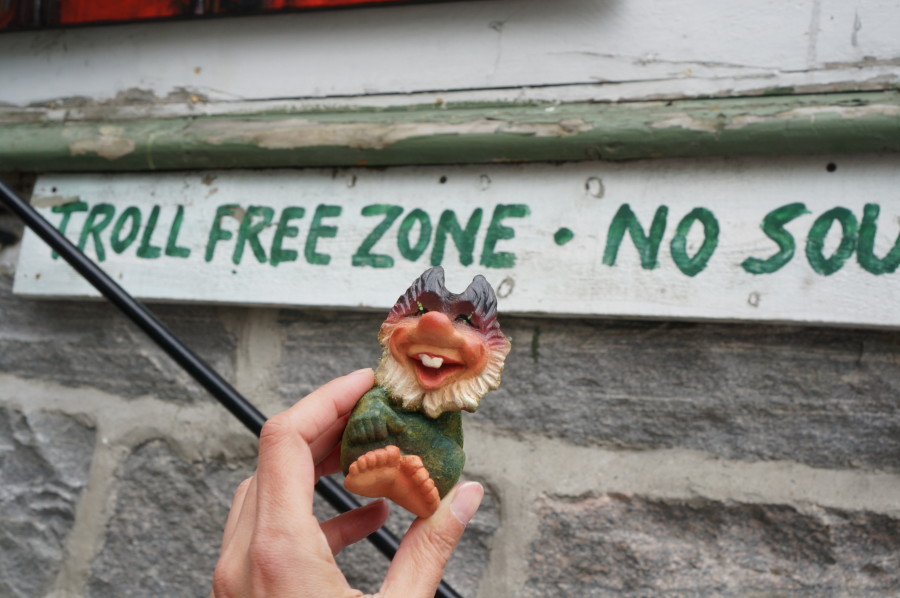 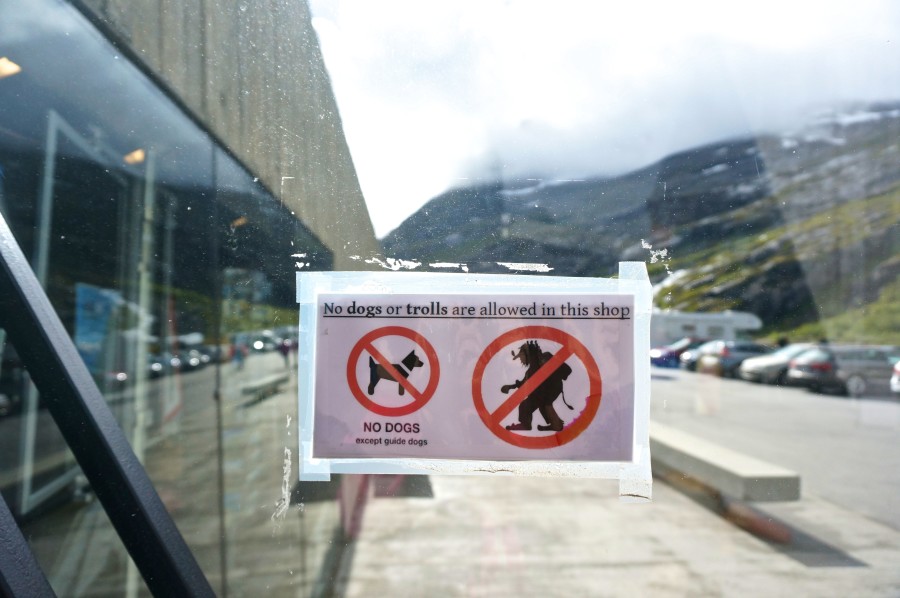 Troll was denied entry to this shop. : (

It was a bittersweet day for Troll as he returned to his homeland, Trollstigen. 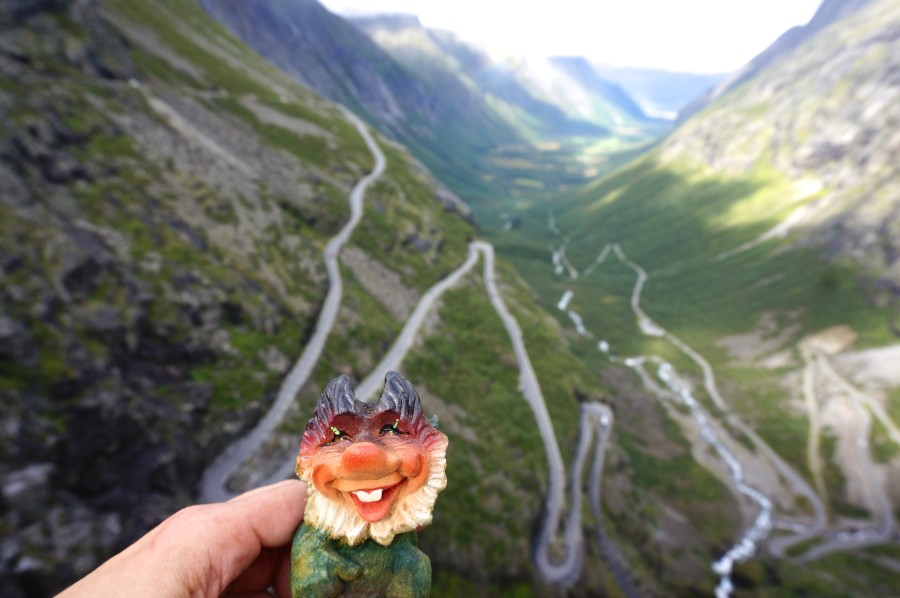 First, Troll surveyed the famous switchbacks of the Troll’s Road. 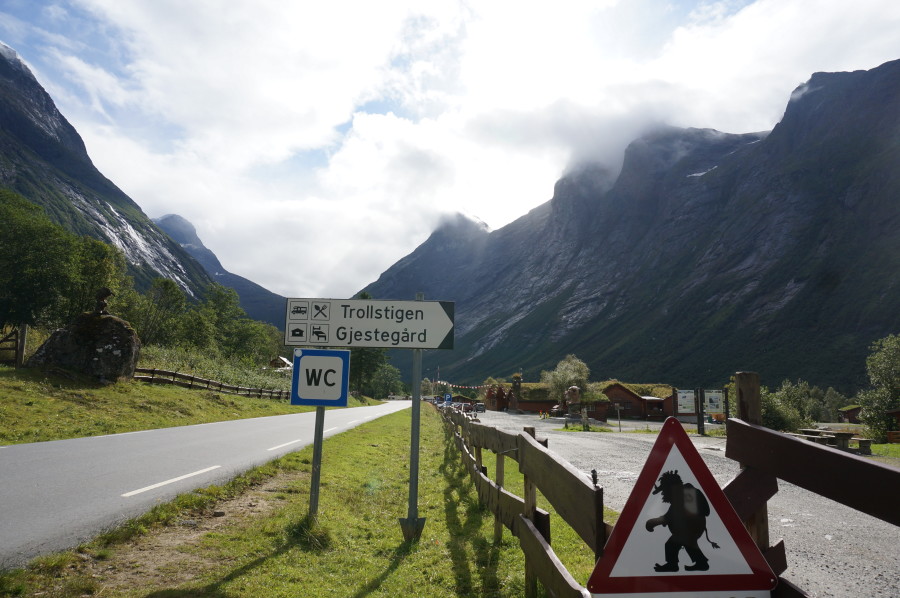 As we drove on, Troll spotted this troll crossing sign and insisted we pull over. 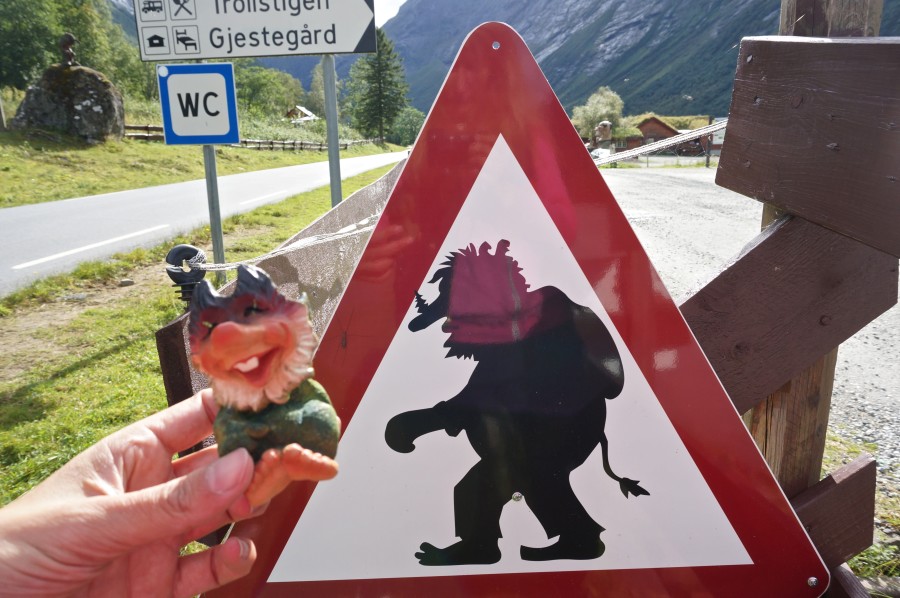 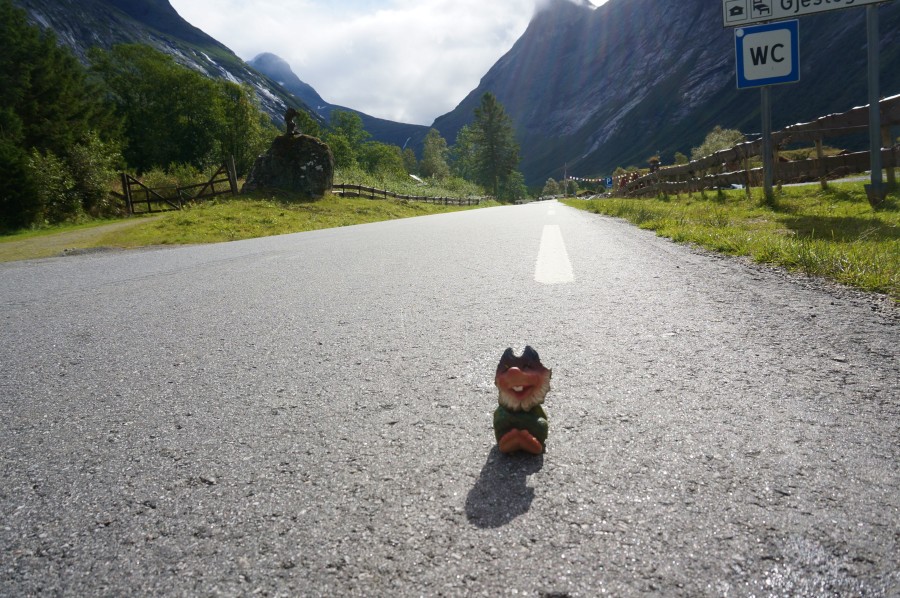 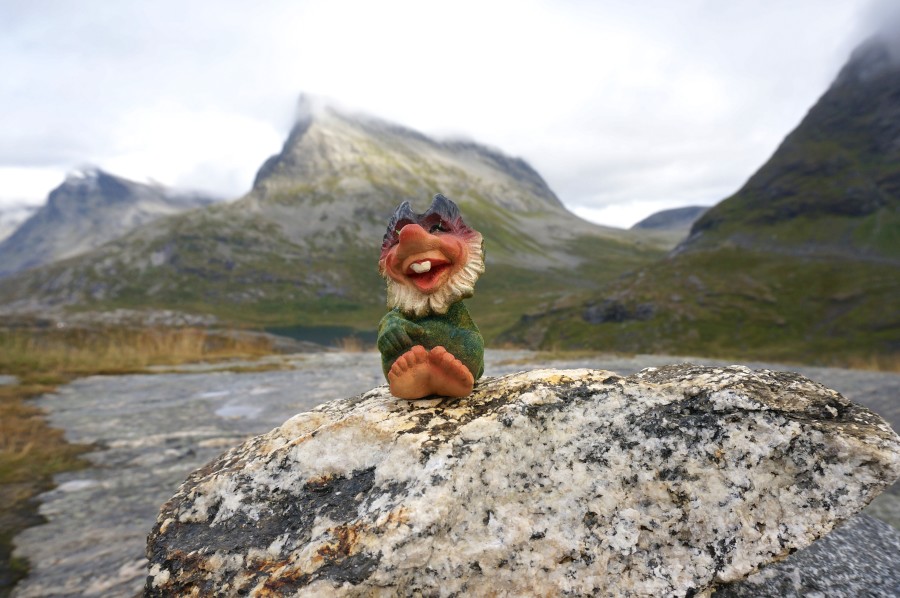 Troll is at his happiest when surrounded by the mountains and massive stone boulders of Trollstigen.

Do you love trolls? Have you ever photographed a souvenir on your journeys? Share in the comments!

Disclosure: my visit to Norway was hosted by Visit Norway USA and their partners.

Sooo cute! Troll looks so happy! Will get my own troll when I visit Scandinavia later this year.

LOVE TROLLS ! looking for a flag. (Approx. 30 inches by 48 inches) to hang by my garage door. With a Norwegian mountain TROLL on it. Any help?

Hi Barbara, I don't recall seeing anything like that in Norway but I wasn't in many of the tourist shops.

Brilliant! You... I mean troll... had a lot of fun. We took our granddaughter's stripy mouse 'Badger' to France on a wine run, included him in the photos and made a small paperback book out of his trip with simple captions. She still goes 'dreamy' when she looks at it! RH

The troll looks like he had an amazing journey! I love his defiance, breaking rules in Norway!