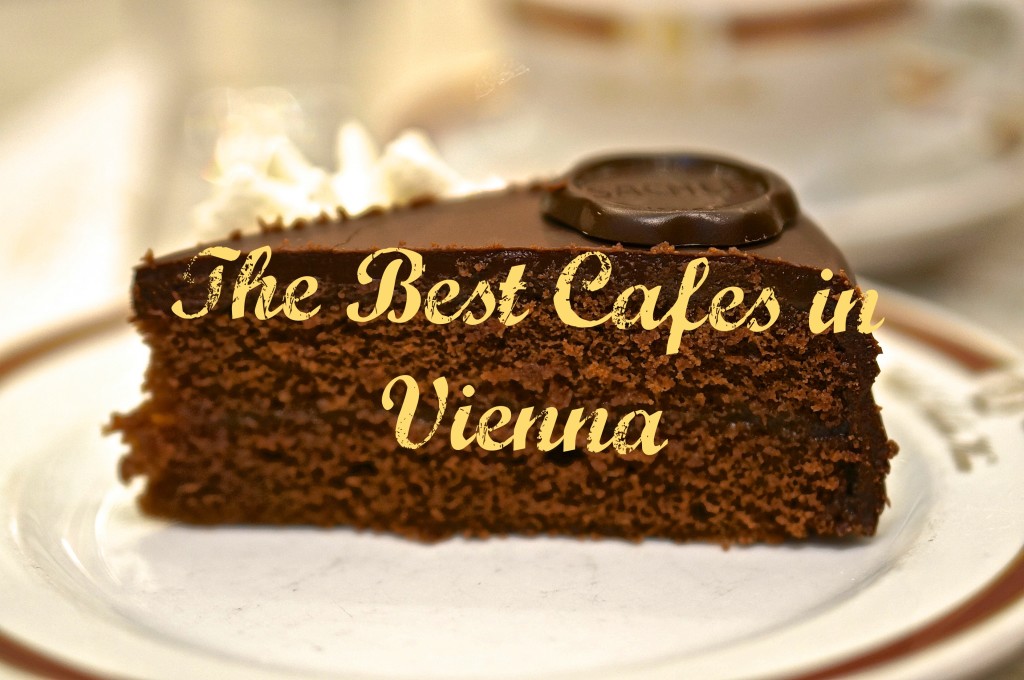 Need a break during a long day of sightseeing and shopping in Vienna?  I can recommend my favorite Viennese cafes to pop into for a quick snack.

Viennese cafes are perfect for a busy traveler, as you don’t need to plan your day around meal times– like an American diner, they are continuously open from early morning to late at night. But instead of a diner’s vinyl booths, stale coffee and rushed service, Viennese cafes are known for their opulent fin de siècle decor, dozens of freshly brewed coffee options, and attentive but unobtrusive service (by servers in formal, starched uniforms, no less).

Viennese Cafes– What to Order

While at most Viennese cafes you can order everything from a soft-boiled egg to a schnitzel, they are best known for their coffee and cake. 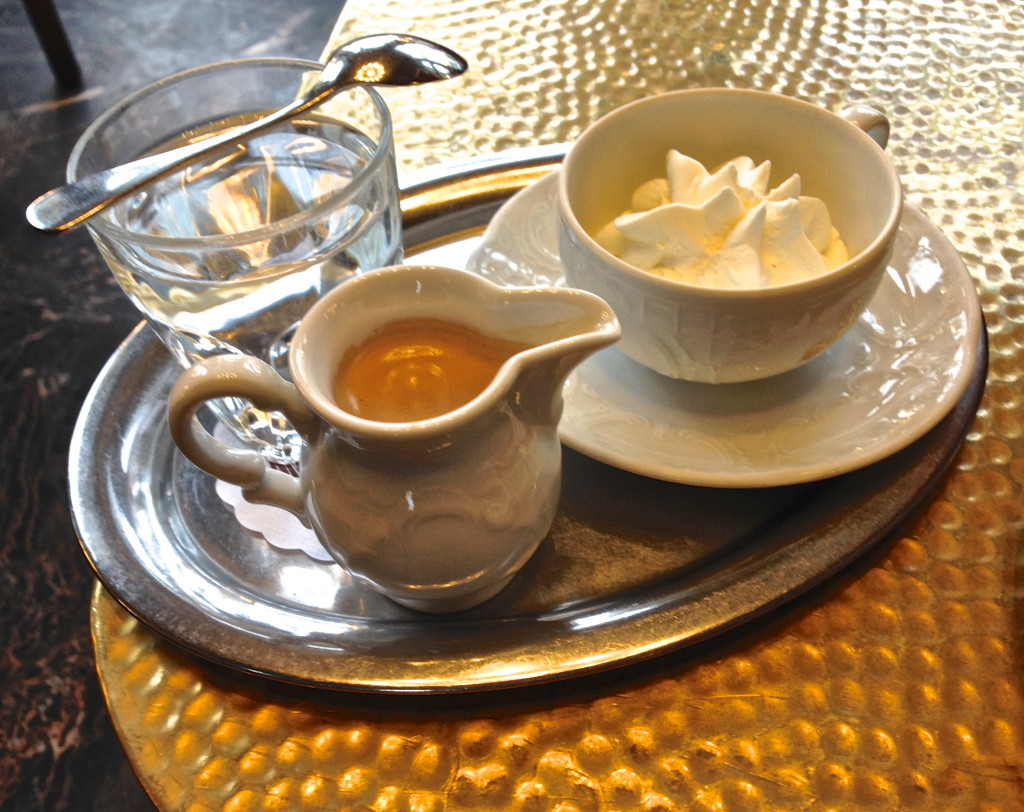 In Vienna, even the coffee is artfully served.

Viennese coffees beat any Starbucks, especially when topped with a dollop of unsweetened fresh cream. 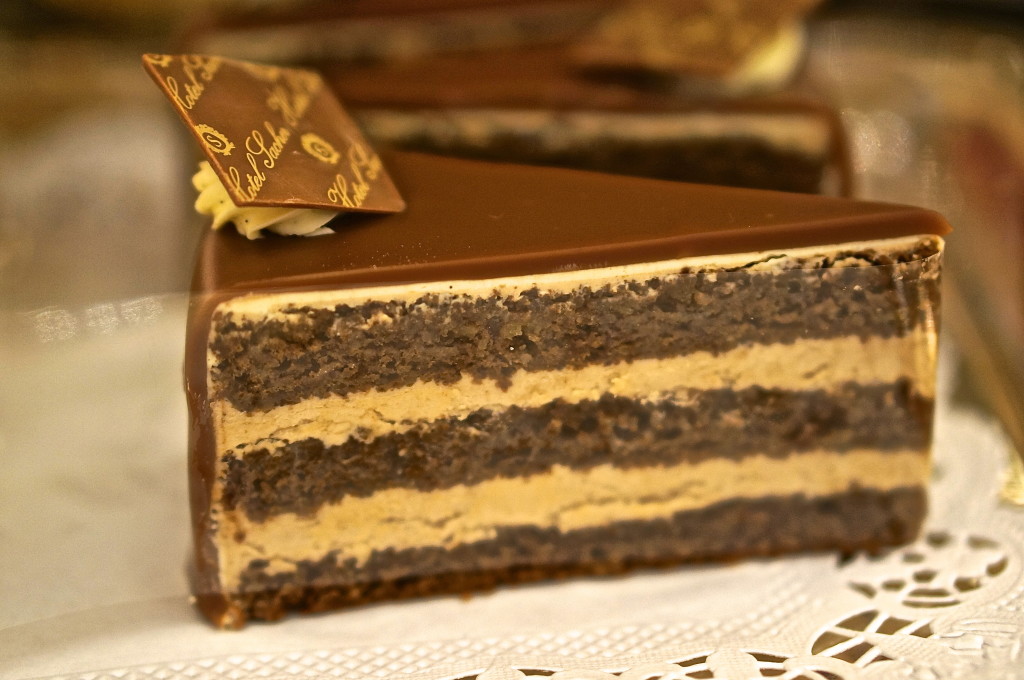 Viennese cakes, in my opinion, are the best cakes in the world– far less sweet and cloying than their non-European counterparts, their multiple layers and drier consistency perfectly balanced by that side of cream.

Why there is no single “best” Viennese cafe.
Don’t waste your time trying to find the single “best” cafe in Vienna– there isn’t one. What’s best for you may depend on your budget, preference in decor and what’s convenient to where you’re going. I found certain cafes to be better for cake, some better for price and others better for a fancy (or cozy) atmosphere. My advice is to try a bunch of cafes and come up with your own “best” list. 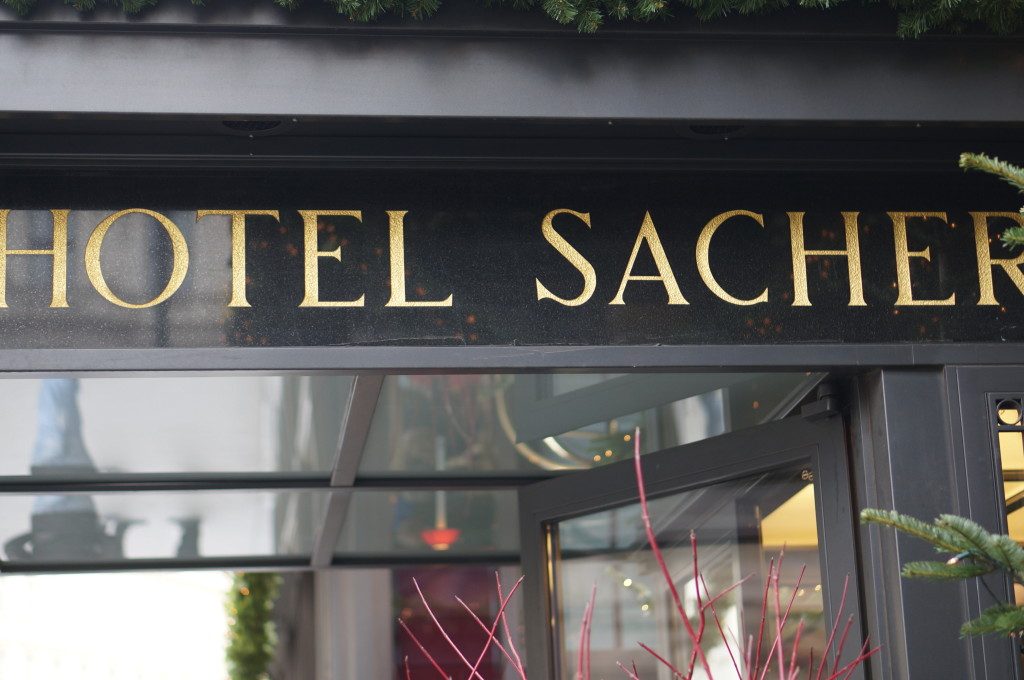 In Vienna, Cafe Sacher is an institution. The cafe itself is more intimate than some of the other “big names,” with multiple smaller rooms and cozy seats in a still very formal, classic Viennese setting.

Yes, Cafe Sacher may be filled with tourists, but for good reason– the cake is delicious! Come at slightly off hours and you shouldn’t have to wait for a table. 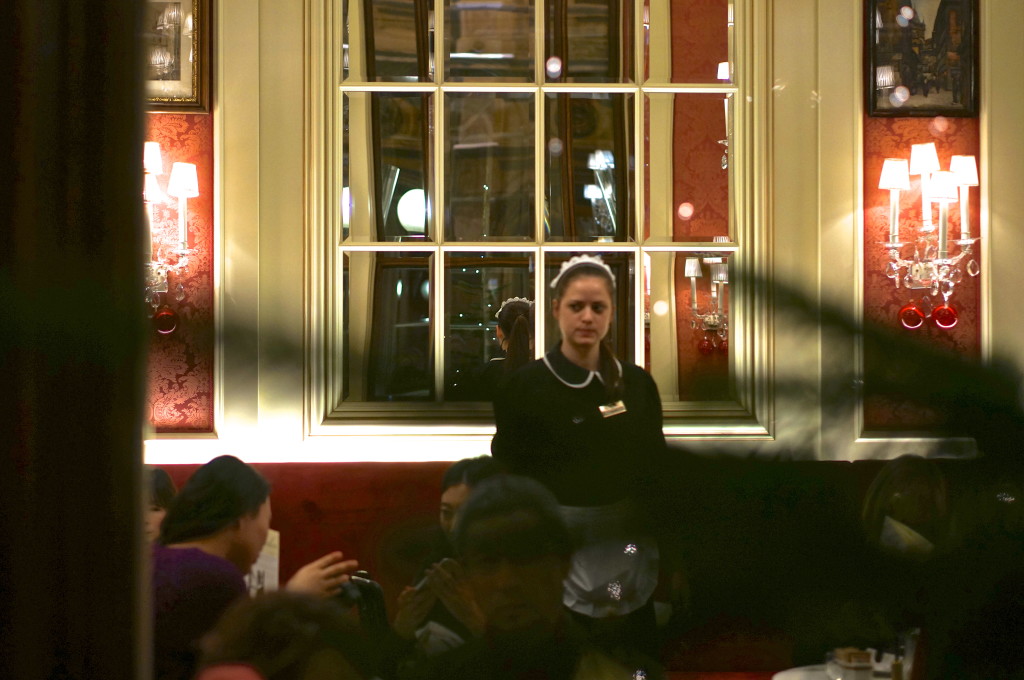 I felt ridiculous taking photos of Cafe Sacher’s starched servers, so I peeked through the window to snap this shot (those are tree branches in the way).

The service at Cafe Sacher is old-world traditional– servers wear perfectly starched uniforms and maintain a refreshing level of formality so often absent in service today. 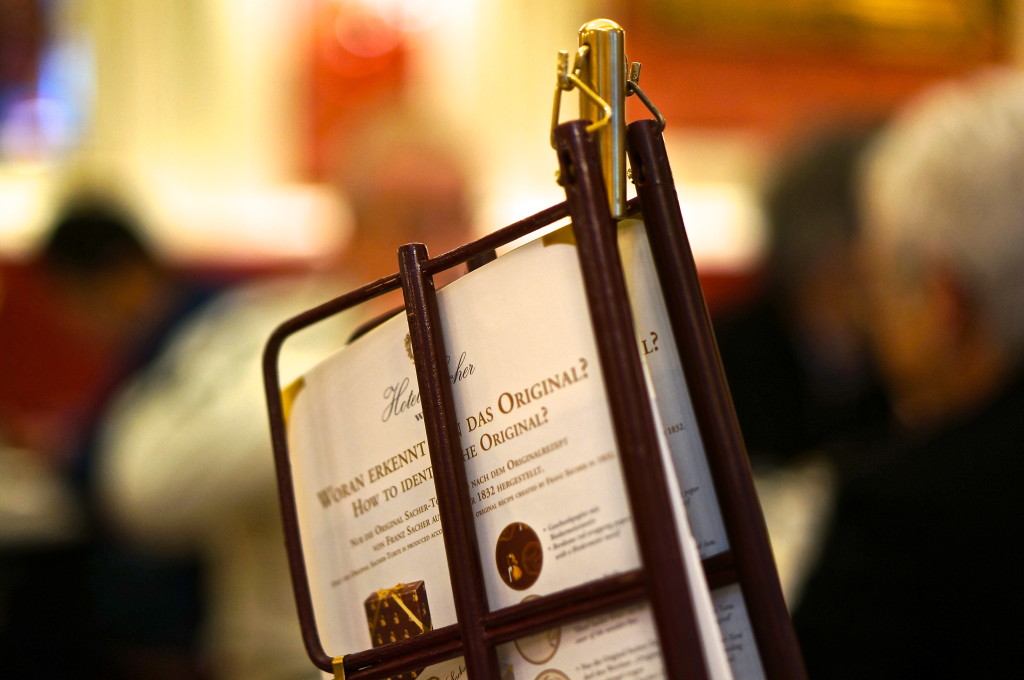 The Cafe Sacher menu has English translations, along with helpful descriptions of the cakes and coffees.

Start with a specialty coffee, made to order. Cafe Sacher displays its cakes right in the middle of the dining area. Feel free to peruse your options before ordering. 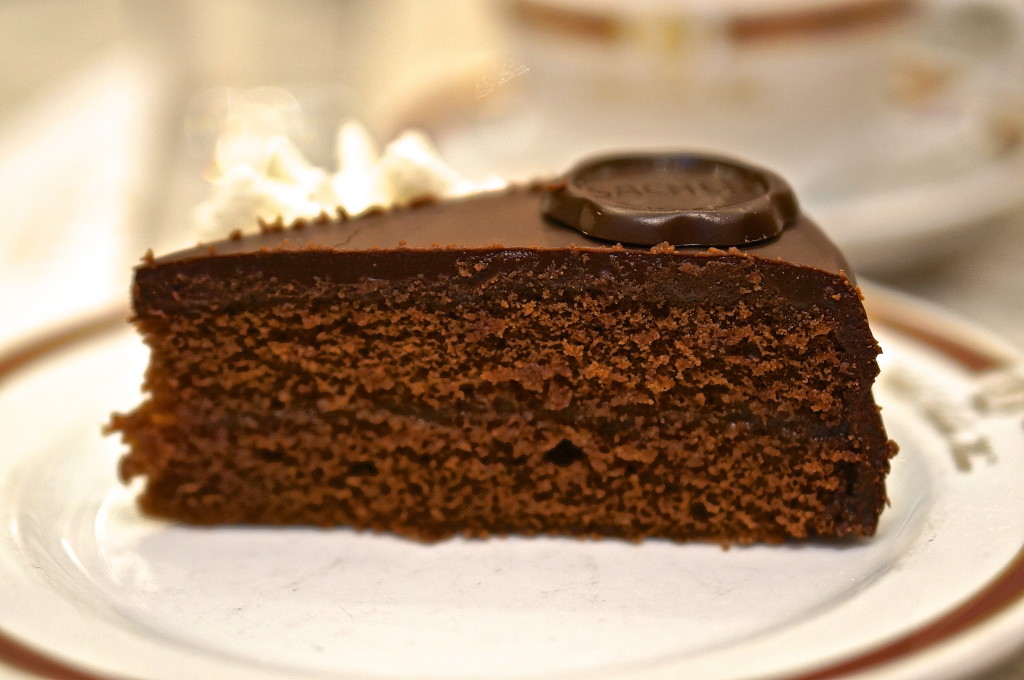 Pay no mind to the naysayers who claim the Sacher torte is overhyped– they cannot appreciate the fine texture and subtle flavor, and would probably be happier with a sickly sweet cupcake.

But I can never order anything other than my favorite cake here– the sacher torte. Because sacher torte is my favorite cake in the world and I have tried it nearly everywhere it’s available, I consider myself extremely qualified to crown Cafe Sacher with the title of Best Sacher Torte ever. Make sure to order your sacher torte mit creme (with cream).

The grand Hotel Imperial in Vienna

Lots of chandeliers at the Hotel Imperial

the lobby at the Hotel Imperial

This is the imperial Torte– the take away version.

The grand staircase at the Hotel Imperial in Vienna.

On my first visit to Vienna, I stayed in the very grand Hotel Imperial. We stopped into the equally grand Cafe Imperial late one night for a slice of their famous cake, the Imperial torte– this time skipping the coffee and indulging in an after dinner drink instead.

While the Imperial Torte was delicious, what really sets the Cafe Imperial apart is the fantastic people-watching (especially post-Opera). On the evening we visited, Viennese ladies dripping in furs invaded the dining room. I cooed over an adorable chihuahua, perched on a chair stacked with embroidered damask pillows, sitting proudly next to her owner.

Before you decide I’m all fancy and that I only dine in the most fabulous establishments, I’ll let you in on a little secret. While staying at the Hotel Imperial, I didn’t always have the time (or funds) for an elaborate hotel breakfast. Most mornings, I would slip out of the hotel and sneak across the street to this cafe instead–

Yes McCafe is part of the McDonald’s empire.

The extensive cake selection at McCafe in Vienna

Yes, that’s a McCafe and it is part of the McDonald’s empire. The McCafe in Vienna, I quickly learned, bears no resemblance whatsoever to American McDonalds.  You’ll find perfectly adequate (ok, yummy) coffee and cakes here, all takeout ready and priced right. Each morning, I ordered my cakes and coffees to go, then slipped the McCafe bag into another nondescript bag to carry back through the Hotel Imperial lobby– not that the discreet staff would have even raised an eyebrow.

Cafe Sperl is a little down at the heel, which I thought adds to its charm, but may not be for everyone.

Most of my travel-loving readers will be familiar with the iconic film, Before Sunrise. (If you haven’t seen it, it’s a must-rent, both for the sweet story line and the classic scenes of Vienna). I fell for Ethan Hawke quicker than Julie Delpy did, and love how the city of Vienna was a really a third character in the film. One of Before Sunrise‘s most memorable moments takes place at cozy table at Cafe Sperl, as the two young lovers lose themselves in conversation over coffee. This warm cafe is the perfect spot to duck into on a frigid night, with your lover on your arm– and even sit at the same table as Hawke and Delpy. 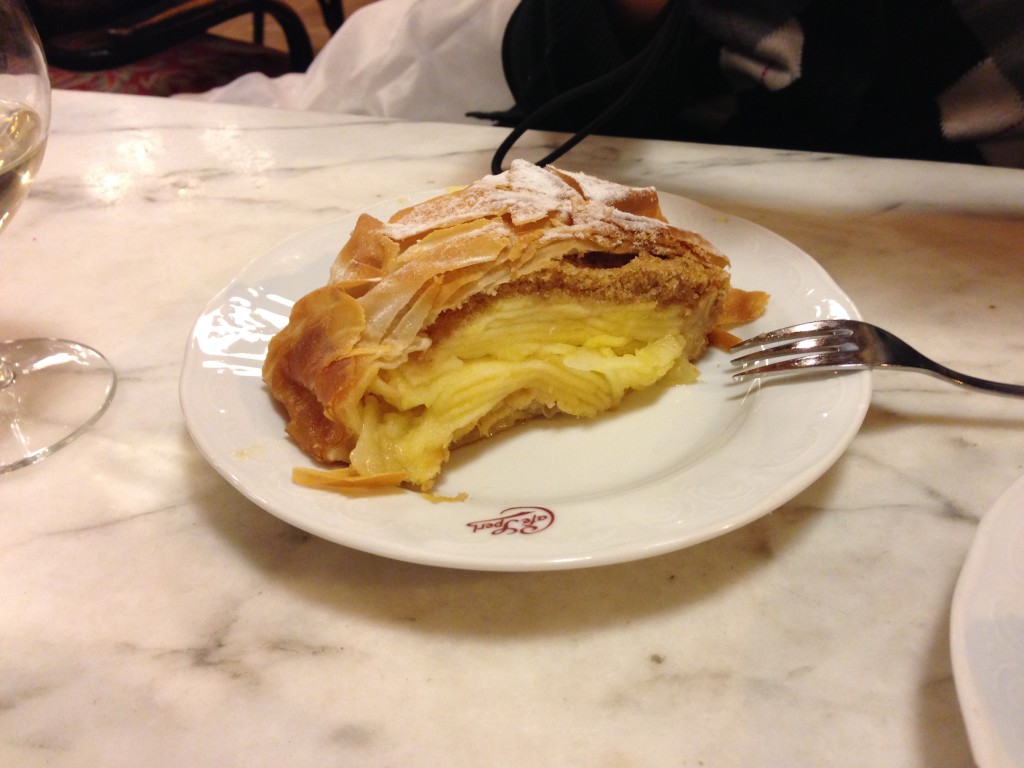 The Sacher torte here tasted like boxed cake, but this apple strudel delivered– it is as luscious as it looks.

Cafe Sperl isn’t really known for its food, so stick with the coffee and the divine apple strudel. 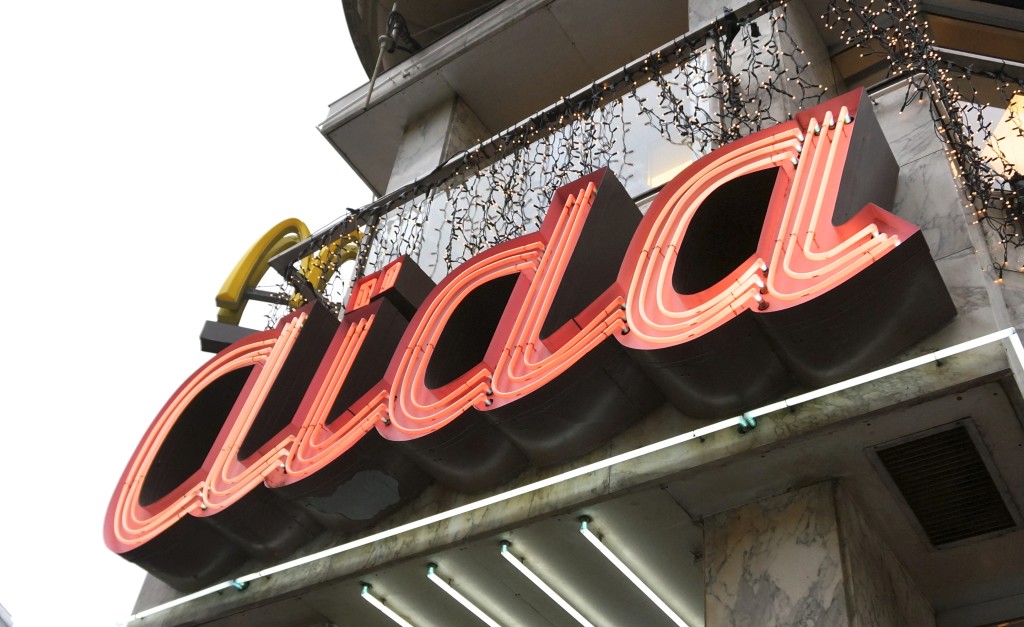 Aida is a mini-chain with several locations scattered around central Vienna. 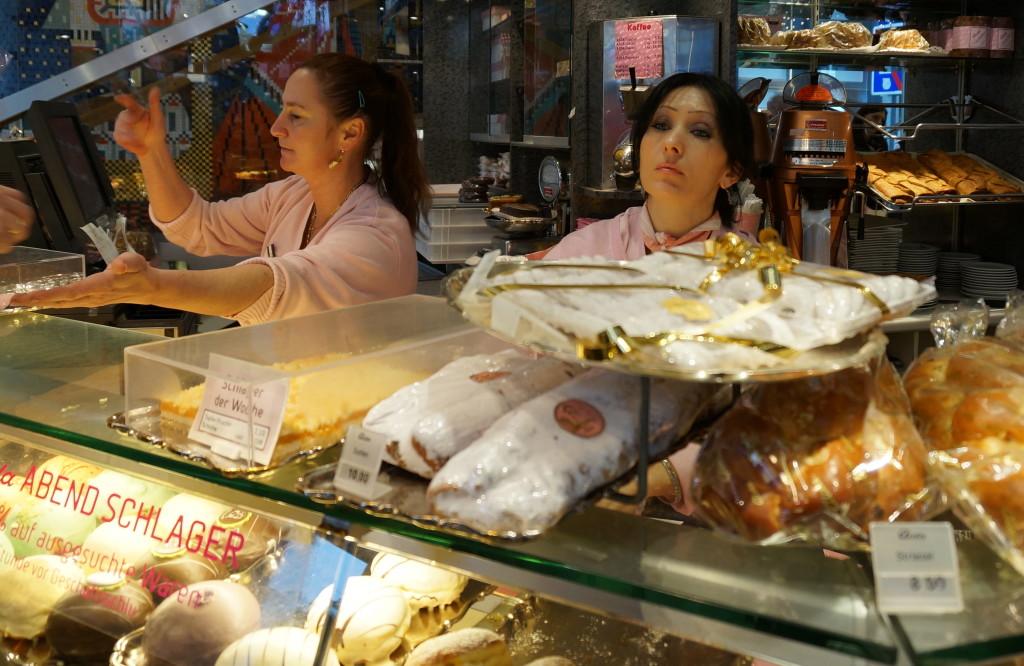 Aida has a bit of a hectic environment and lacks the charm of some of the other cafes, but its low prices and quick service put it on my recommended list. 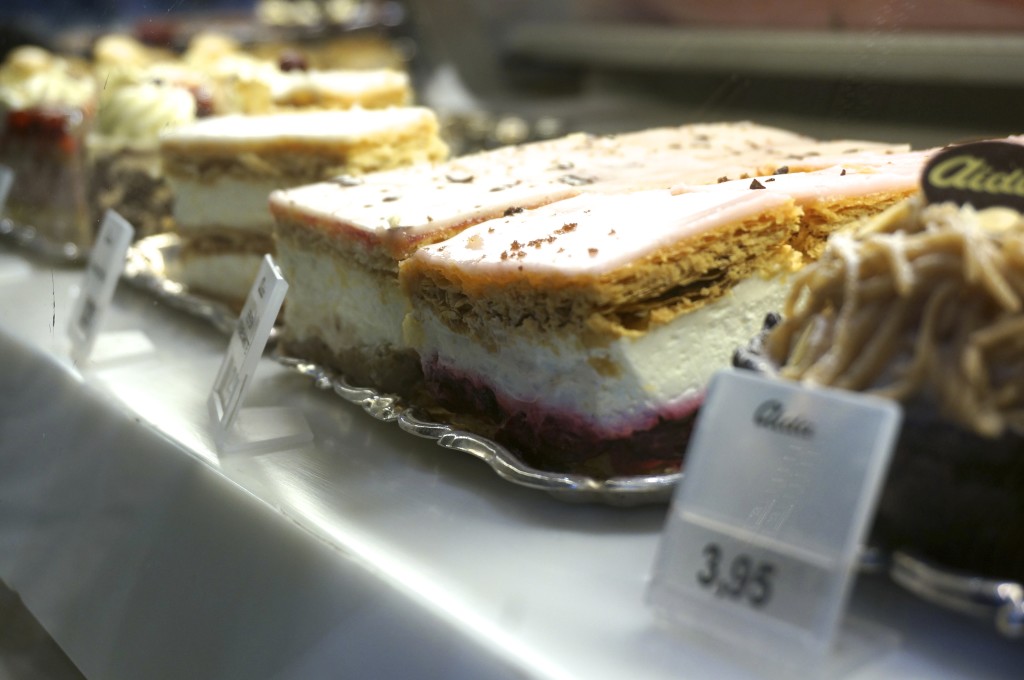 At only 4 euros or so for a slice of Aida cake, you can sample a couple for the price of less than one slice at a fancier cafe.

Cake at Aida Cafe in Vienna

Pick your cake at Aida from the display case

Aida cafes are perfect for a quick pit stop when you’re short on time– instead of taking time to sit at a table with waiter service, you can instead buy your cake at the counter and stand at a tall tables (where you can quickly scarf down your cake) like we did.

We enjoyed bite-size samples of the cafe’s menu and can report back that it was all delicious.

On my last visit to Vienna, I stayed at the elegant Hotel Bristol. The Bristol’s cafe had been under a long renovation and unfortunately was shuttered during my stay. But on my last night, the hotel hosted a preview of the new restaurant, called the Bristol lounge, scheduled to open the next day. After a painstaking renovation process, the cafe restored its original art deco features (including a gorgeous ceiling that had been covered up for years), then added modern comforts like plush chairs, perfect to collapse in (with plenty of room to stash shopping bags) for a mid-day break.

Is that Salman Rushdie in the corner?

I’ve had breakfast, light dinners (fantastic schnitzel), cocktails and cake at Cafe Schwarzenberg, and recommend all of them.

On my last visit to Cafe Schwarzenberg, I had a tough time selecting a cake for breakfast (yes, breakfast)– they all looked so scrumptious. 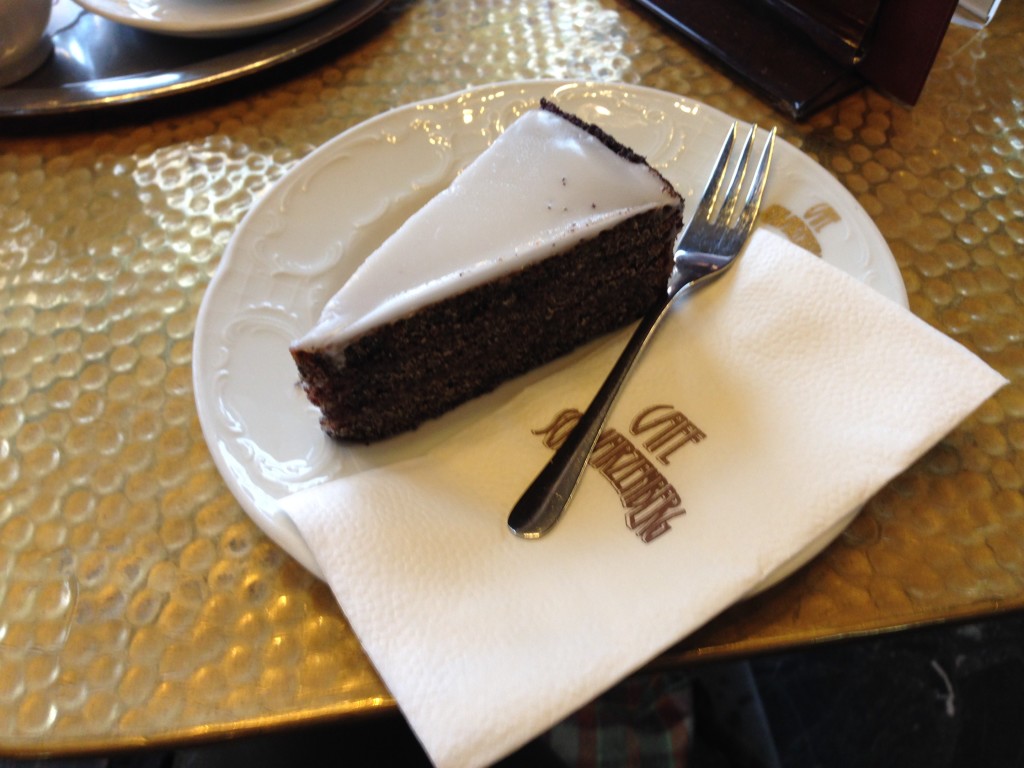 When I later asked what was in this scrumptious cake, the waiter replied “opium.” Although this yummy cake probably had the same effect as opium on me, I believe the English word he was searching for is “poppy.”

I’d never heard of mohn-torte, so I took a chance on it, and was delighted with the unexpected, but delicious flavor and delicate texture.

What are your favorite Viennese Cafes? Share in the comments below!