Is it possible to have seen too many Christmas markets? I didn’t think so before our whirlwind market trip through Vienna, Salzburg and Munich. By the time we’d hit Munich, the last leg of the tour, we’d made our way through a dozen markets and I was starting to think that perhaps I’d reached my limit. 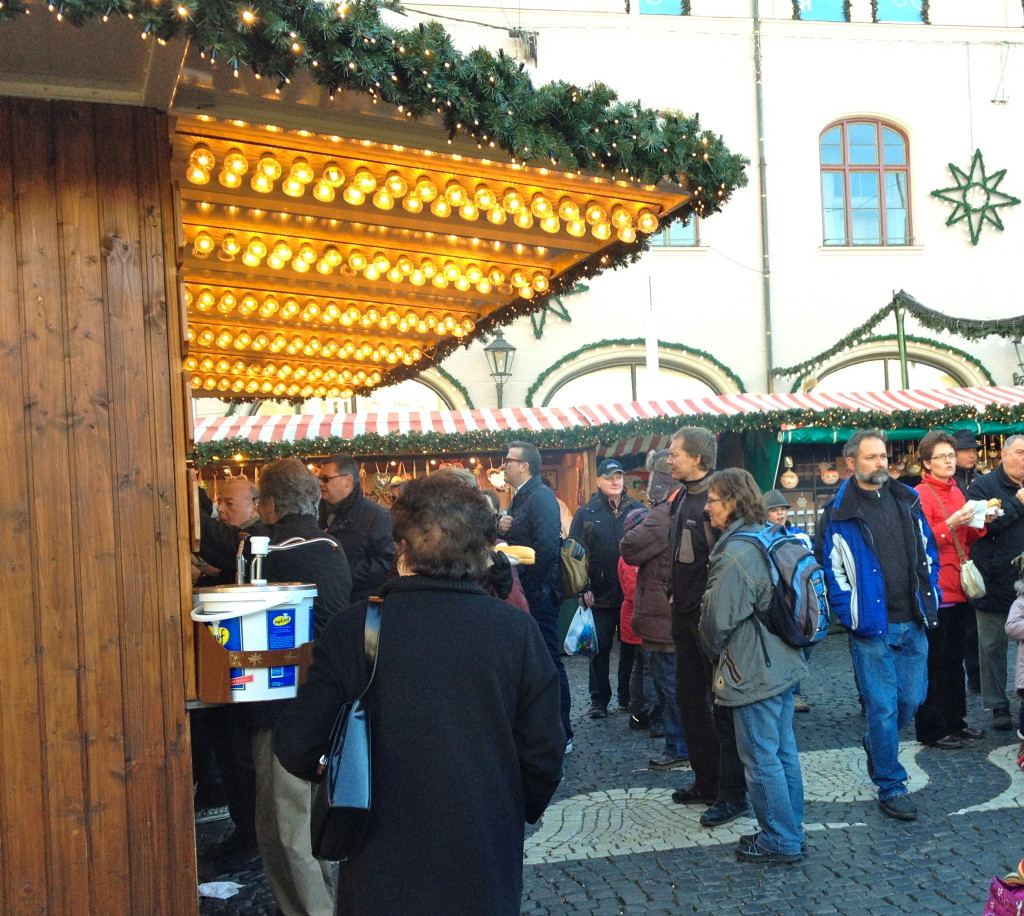 But we had one more market to hit. I was traveling with a former military brat who reminisced about his storybook childhood spent in Augsburg and wanted to revisit the magical city. So we hopped a regional train to Augsburg, only a 30 minute ride from Munich’s Westbanhof station.

Founded over 2000 years ago, Augsburg is the largest city on what’s been dubbed the “romantic road”– a tourist route created after World War II to encourage tourists to travel through Bavaria’s most “romantic” sites (cue fairytale castles, fortified cities and Bavarian countryside). While the more city-like Augsburg  doesn’t have the movie set looks of smaller villages like the walled city of Rothenburg, it still has plenty of charm, and most importantly, feels like a place where real people live. 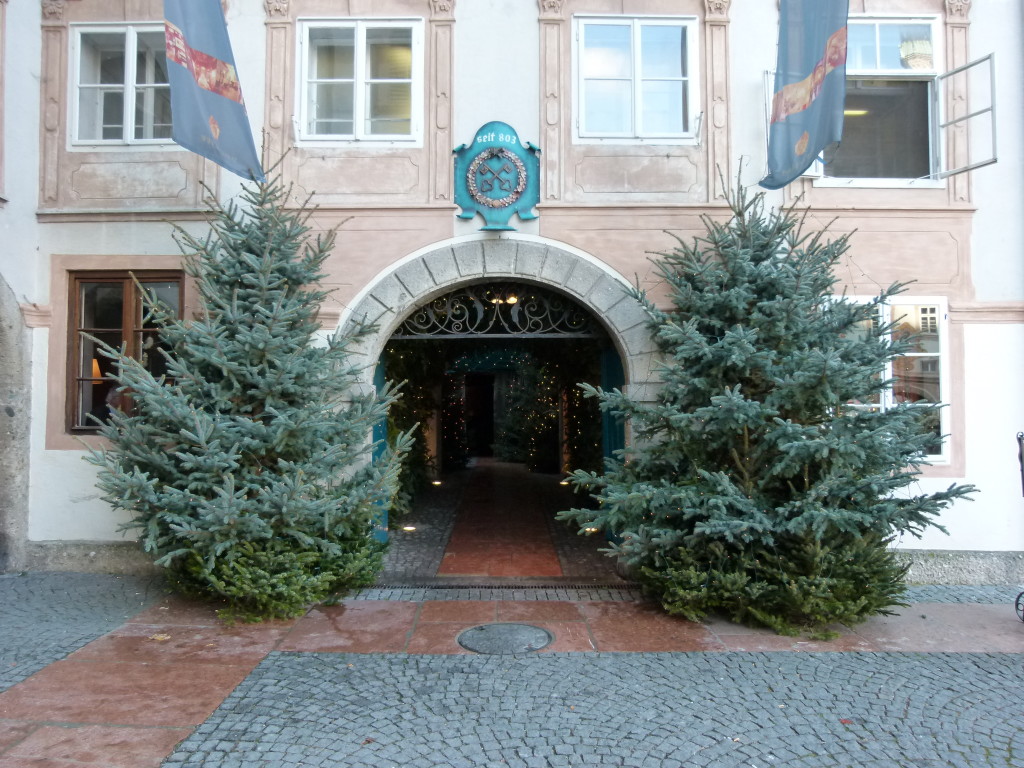 It’s a short walk from the train station to the center square of Augsburg, where the Christmas market is held. 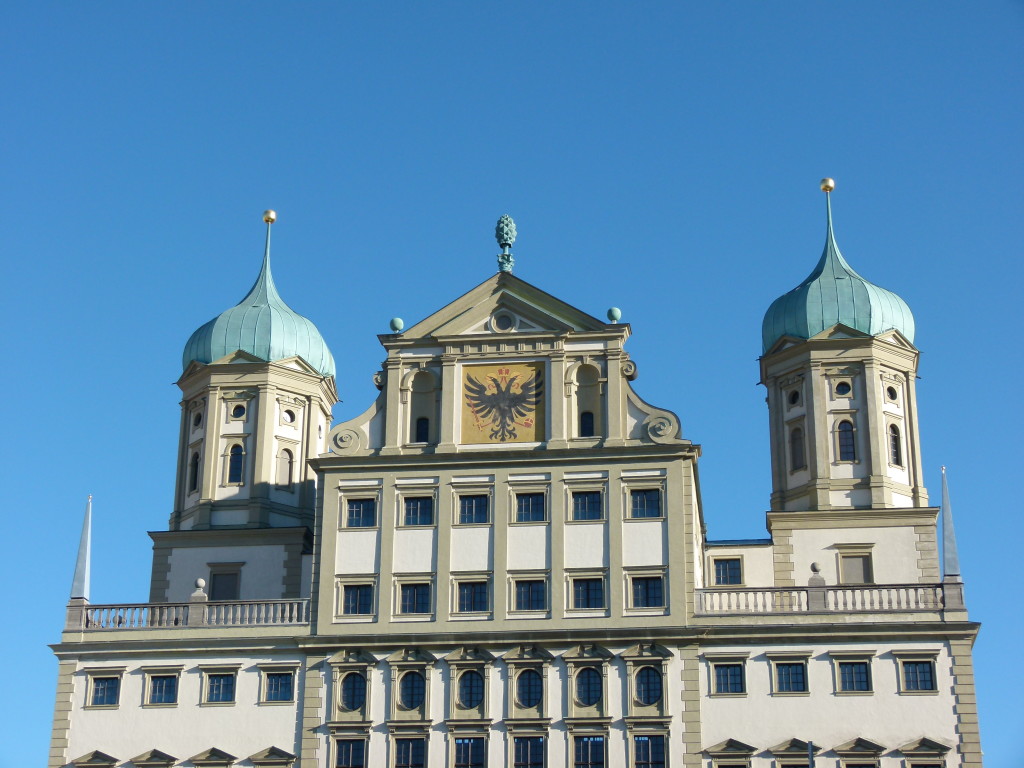 The Christmas market is bookended by Augsburg’s striking city hall (Rathaus), built in 1615 in the Renaissance style. 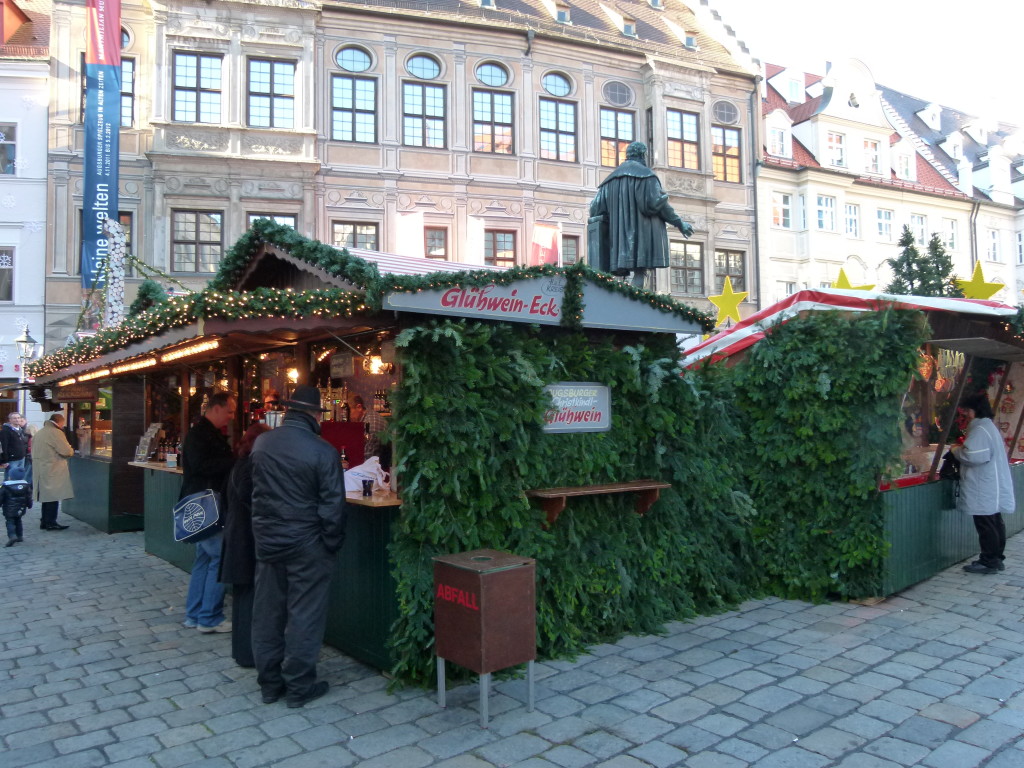 Despite being the very last Christmas market we saw, Augsburg was our favorite. The market was large enough to keep us occupied, but never felt overcrowded. I didn’t notice any other American tourists when we were there. We took our time browsing the market, and it really did feel like we were just enjoying a local neighborhood tradition instead of at a major tourist attraction. 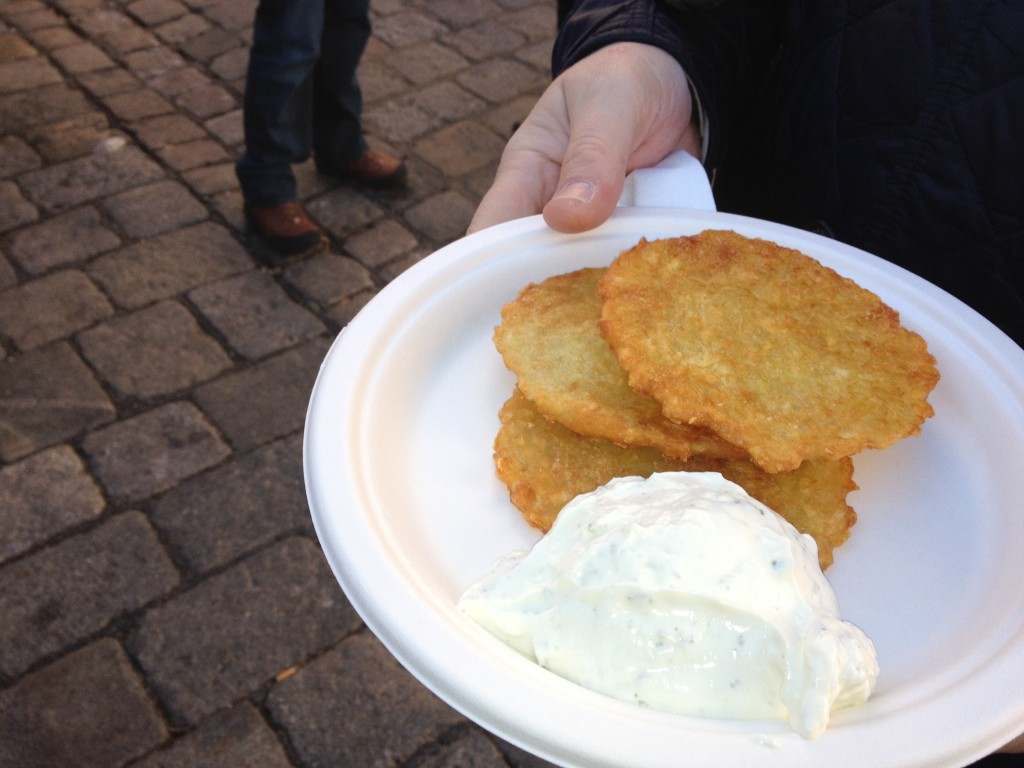 Having grown up on homemade potato pancakes, I am not easily impressed. But these were delicious. 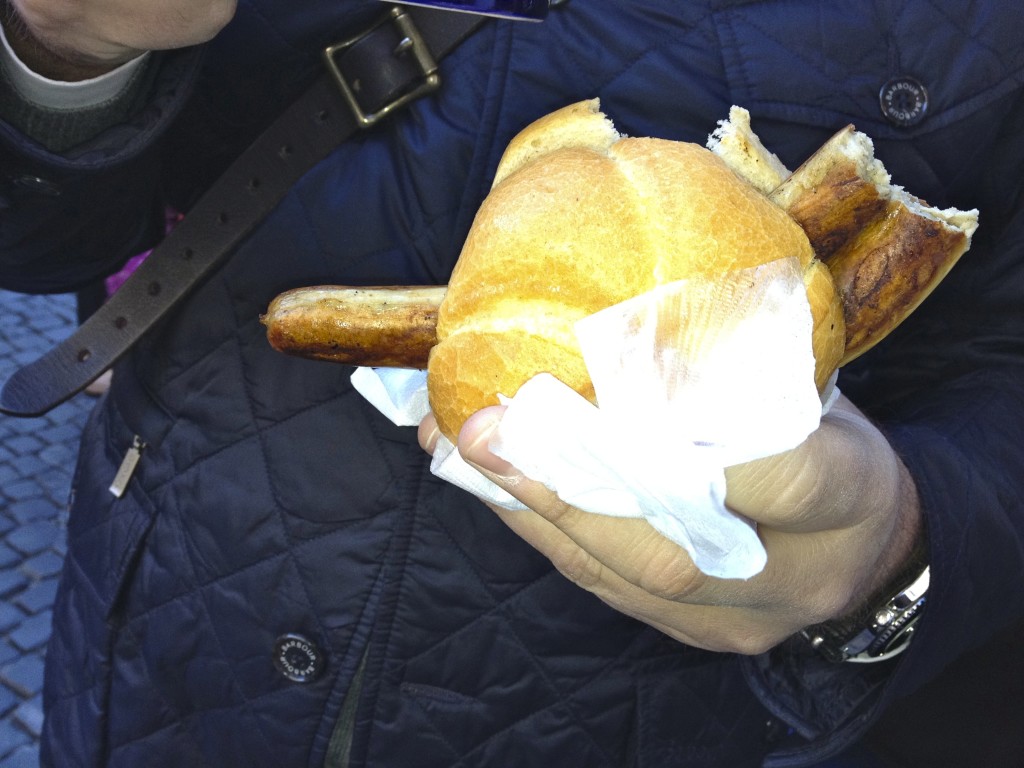 What’s better than a one charred wurst sandwich?  A double, of course. 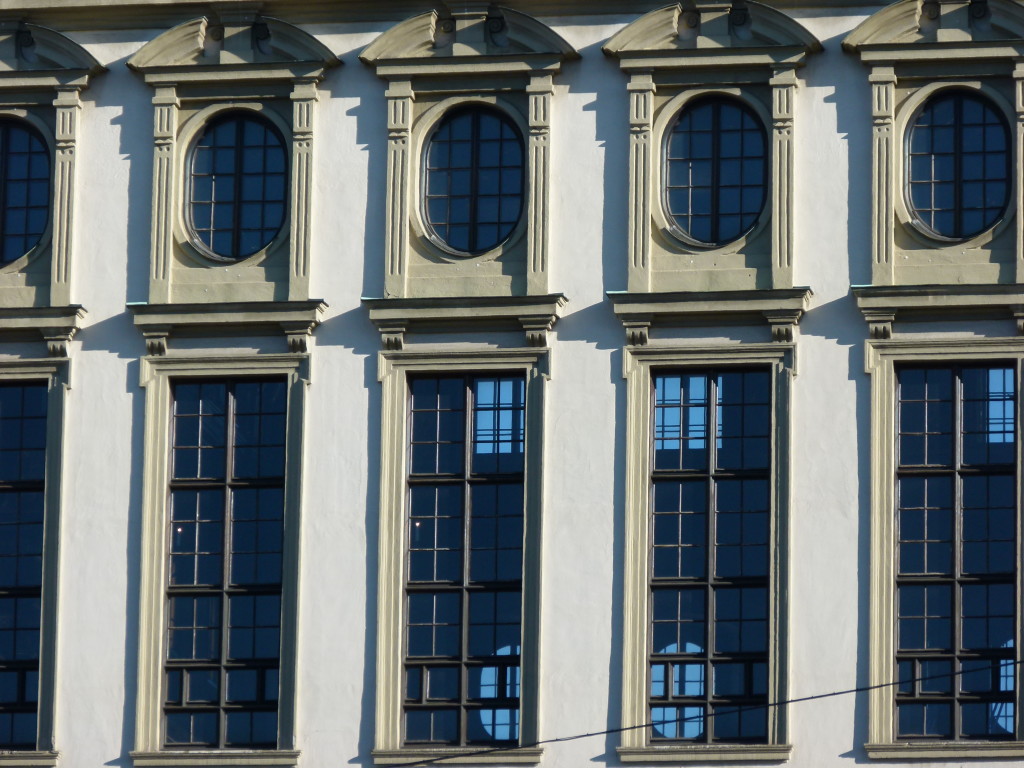 The Augsburg Christmas market is also famous for its angel pageant. We missed the evening show, but we hear that local children appear in the windows of city hall dressed as angels, transforming the hall into a giant, living Advent calendar. 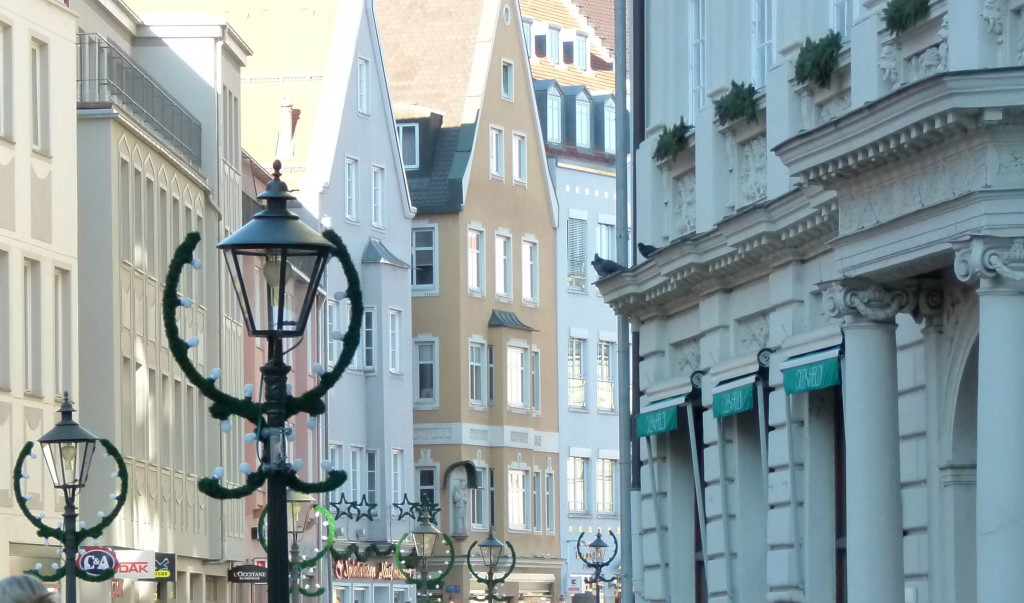 Gabled patrician homes line the streets around the market.

What did we come back with? Quite a lot, most long consumed or given away as gifts. This vendor made us personalized swords (with matching sheaths), shields, pens and necklaces for my nieces and nephews. We also bought Stollen from a local bakery that blew away all the fancy ones we tried in Munich. One vendor had the best tasting mini bottles of jams I might have ever tried. We picked up lots of tiny handmade ornaments too.  The prices here were at least a third cheaper than any of the markets in Munich, with far more variety and a less corporate feel. 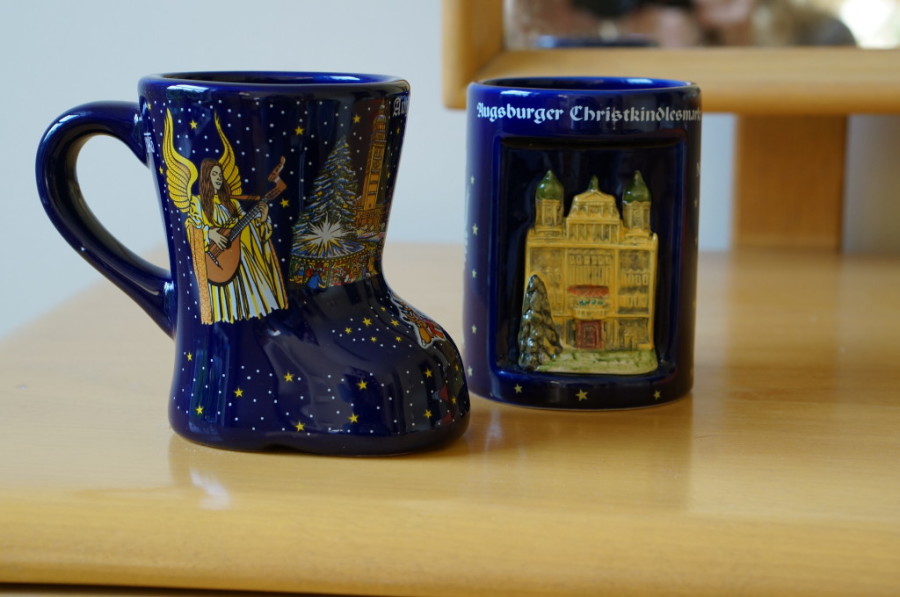 The Augsburg Christmas market had a couple of different designs– I brought them both home.

Christmas markets usually require you to leave a deposit of a few euros for the mug when you get your gluwein. I always just keep the mug as a great souvenir.

When you’re finished with the market, make sure to leave time to check out the Fuggerei, the world’s oldest social housing project, founded in 1516. Two hundred people still live in Fuggerei’s gated community, paying a frozen rent rate of 1 Rhenish guilder (that comes out to just under 1 euro) per year. You’re allowed to wander the pedestrian-only lanes, but make sure to leave by 10 pm or you risk being locked in for the night.

What’s your favorite German Christmas market?  Tell us in the comments below!

If you haven't been to Nuremberg for the Christkindle Markt, you still haven't made it to the best of the best. Lived in Germany off and on for 12 years and there is no other like it.

Going back this year, and you have given me a few more that look well worth checking out, thank you all.

Ernie, I know, I still haven't been! Nuremberg and Alsace are top of my list.

A marathon of markets!