Poppies and Remembrance Day in England

If you visit England in the month of November, you will notice red poppies pinned to the lapel of many residents– especially the older generation. These red poppies were originally a symbol of commemoration of British soldiers who died in World War I (and now include the fallen from all wars since then), and are worn in the weeks leading up to Remembrance Day on November 11 (the day World War I formally ended at the 11th hour of the 11th day of the 11th month in 1918). 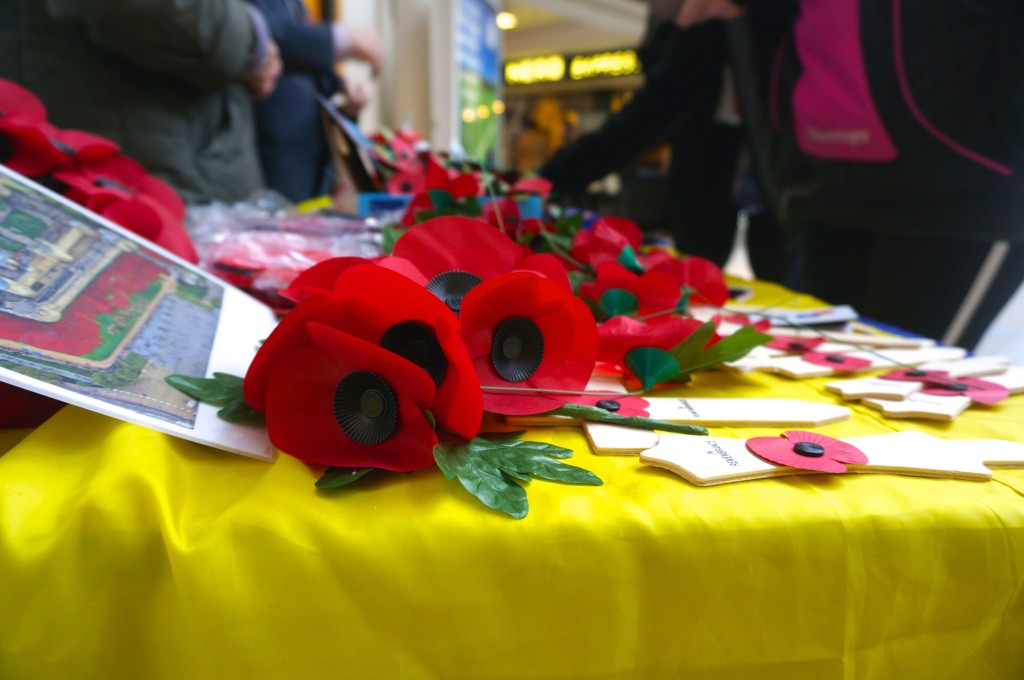 The red poppies represent the first flowers that grew on the graves of British soldiers in the Flanders region of Belgium, as noted by John McCrae’s poem, In Flanders Fields.

In Flanders Fields by John McCrae

In Flanders fields the poppies blow
Between the crosses, row on row,
That mark our place; and in the sky
The larks, still bravely singing, fly
Scarce heard amid the guns below.

We are the Dead. Short days ago
We lived, felt dawn, saw sunset glow,
Loved and were loved, and now we lie
In Flanders fields.

Take up our quarrel with the foe:
To you from failing hands we throw
The torch; be yours to hold it high.
If ye break faith with us who die
We shall not sleep, though poppies grow
In Flanders fields. 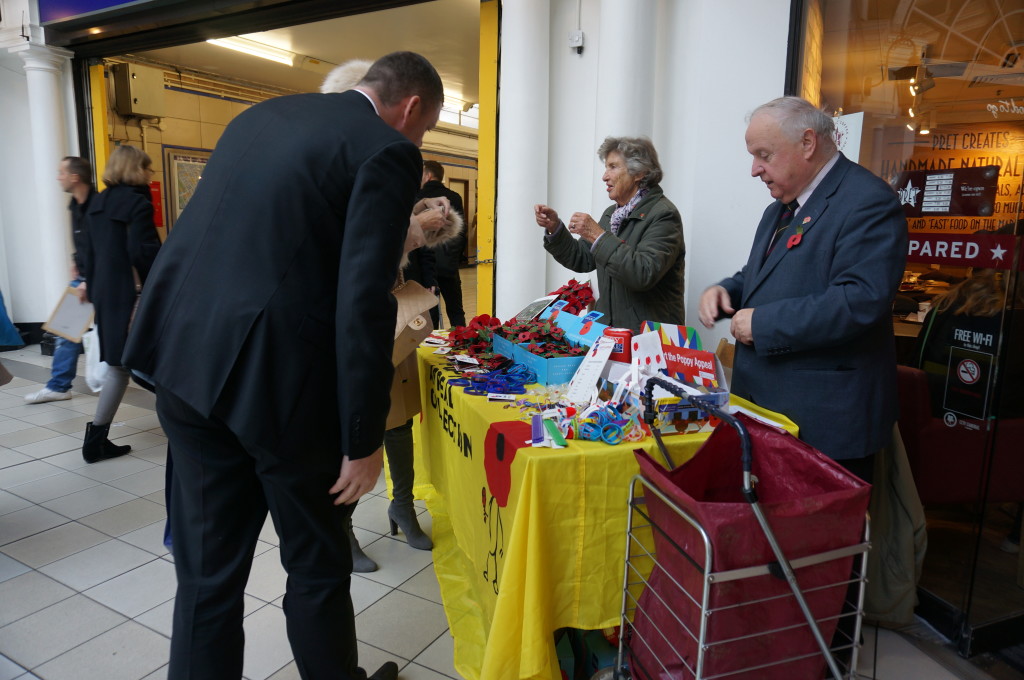 Even as a visitor, you can show your respects for the contributions by the British soldiers, and at the same time, provide support for the Royal British Legion through your donation. You’ll find the red remembrance poppies offered everywhere throughout the UK– in London, you’ll see them at tube stations and on street corners. While most wear the simple poppy, you can find fancier jewelry versions, with all proceeds benefiting the legion. 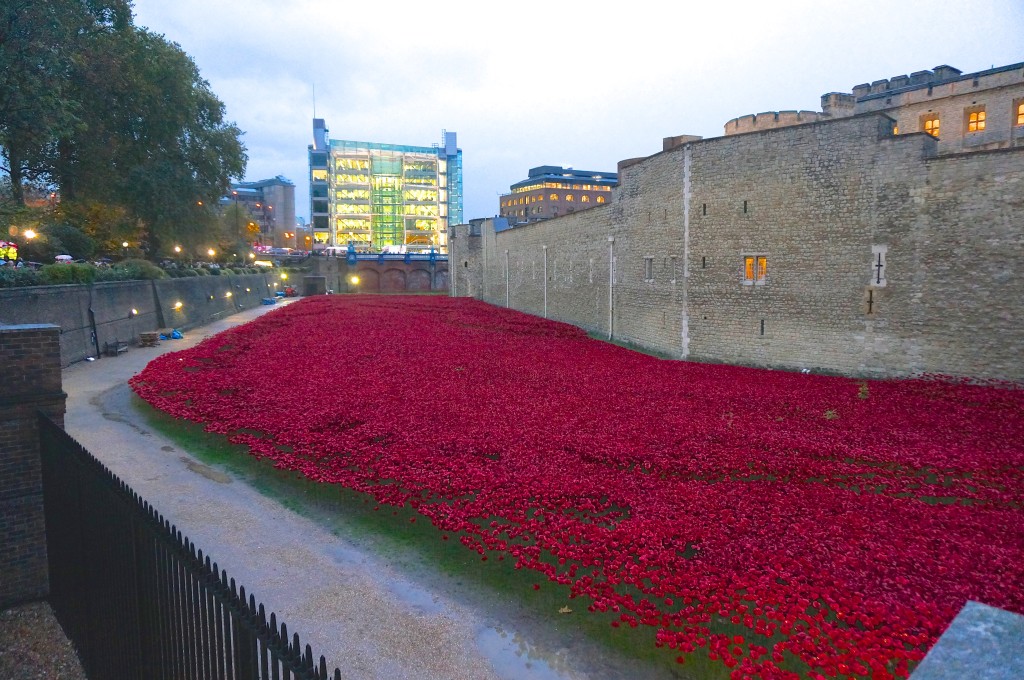 For less crowds, pick a cold, dark rainy day to visit the Tower of London poppy memorial like I did. 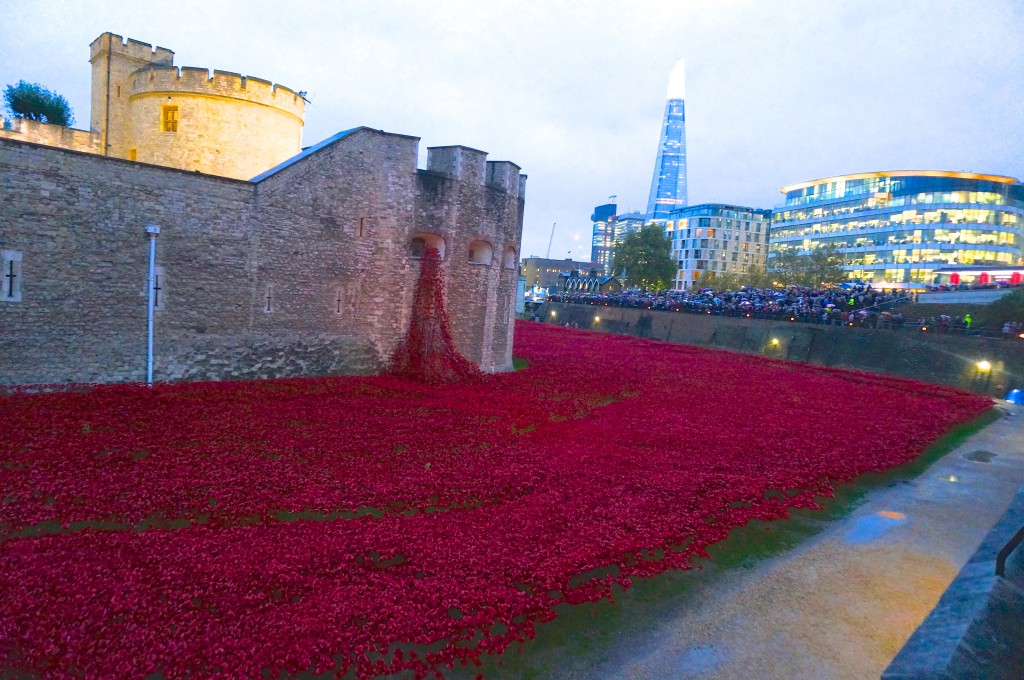 The Tower of London’s poppy memorial was completed in stages. One of the most dramatic portions of the Tower’s poppy installation is called the “Weeping Window,” as red poppies pour out of a Yeoman Warder’s window, spilling out into the moat below. 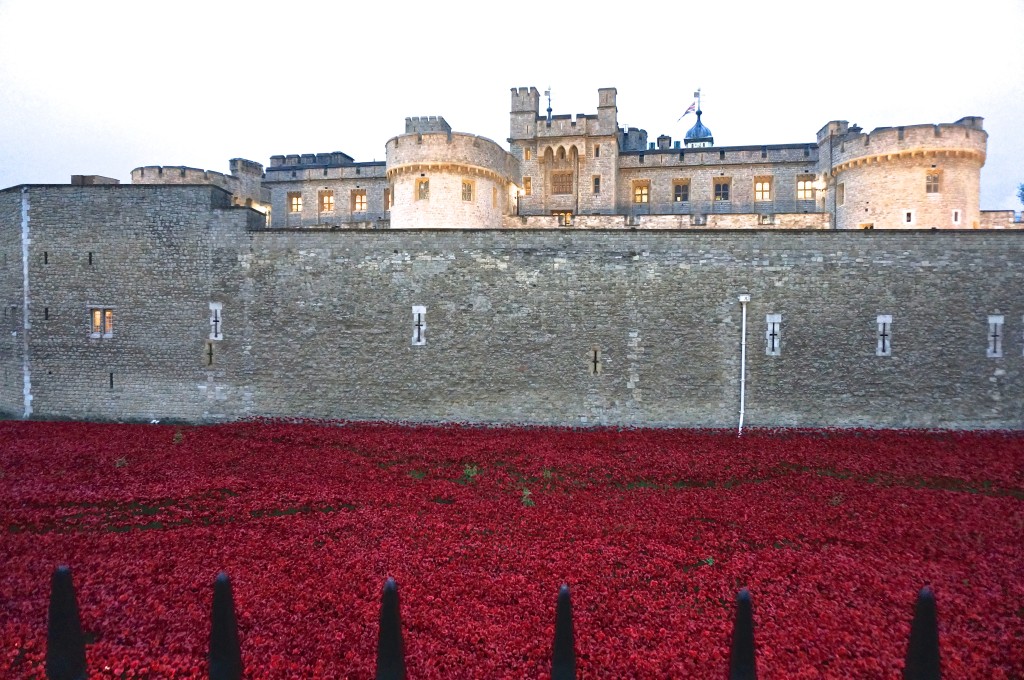 The Tower of London Poppy memorial drew records crowds, and has been extended through the end of November 2014.

Millions of visitors have already seen the Tower of London’s emotional installation, and the recent the completion of the memorial has brought in records crowds. The crowds were somewhat lessened in the dark, windy and rainy conditions when I visited, so I was able to snap a few photos, but nothing can really compare to standing in front of the sea of red poppies in the Tower’s moat. 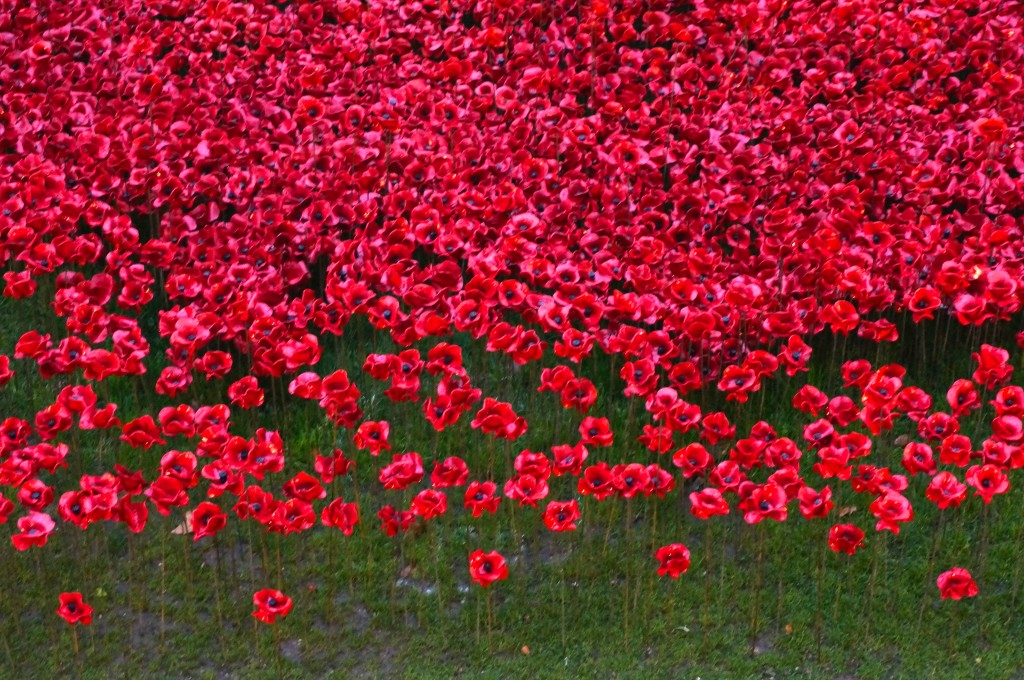 The red ceramic poppies were originally offered for sale to the public at £25 each, but have all been sold. 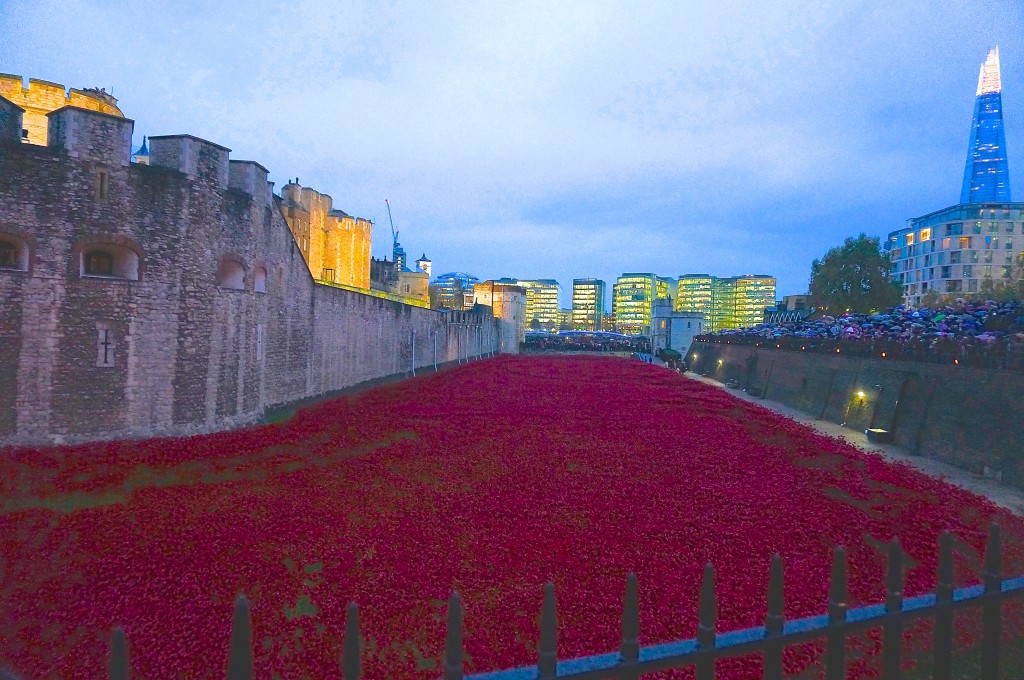 Red poppy memorial at the Tower of London at dusk. 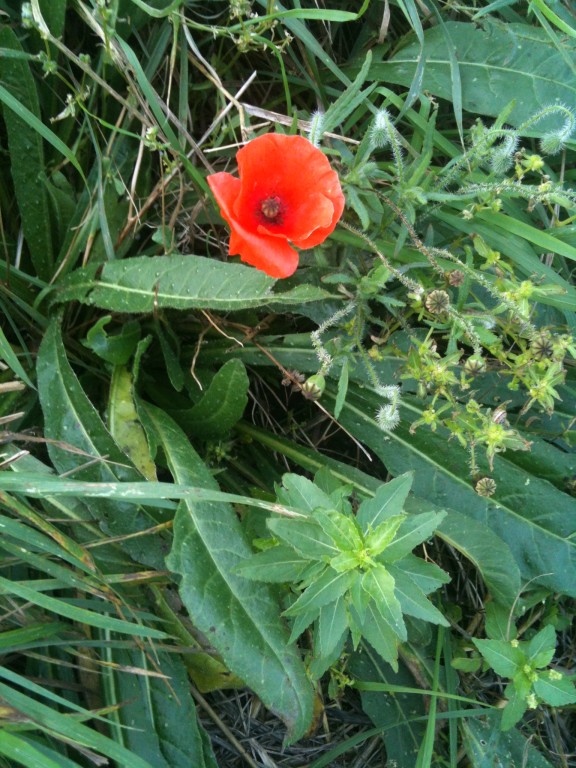 After reading this post, my mom, who had just visited Normandy last week sent me her own poppy photo. She writes, “I took this photo of a single poppy in the fields in Longues Sur Mer between Gold and Omaha Beach, Atlantic Coast, Normandy. There were no other poppies in this field.”

Please feel free to contribute your thoughts in the comments below.

I'm a New Yorker who loves to escape the city to travel and shop-- whether visiting a local artisan or learning about a destination's offbeat trends.
View all posts by Kristin Francis →
Artisan Mexican Mezcal and a Tasty Worm
Our Guide to the Best Shopping in Playa Del Carmen, Mexico